Herman Dog digs in the soft dirt at the back of the yard and uncovers a face. He knows that face and that smell. It’s his Master. His Master has his eyes open and there’s a hole in his face and his face is cold. Herman licks the face. Nothing Herman’s no fool. He knows his Master is fucking dead.

Herman growls and goes after the guys. They killed his Master, so who is going to feed him and play stick and let him curl up on his lap? Herman tells these assholes what they have done is bad. BAD. No! No! BAD DOG.
Herman is a small bulldog, barely shin high. He goes BARK BARK GR GR GR BARK GR GR BARK GRGRGRGR.

They yell at Herman. They are thin with sores on their faces. They smell like chemicals that his Master takes when his nose is stuffy. They also smell like the leather square his Master carries around in his clothes when he leaves, and puts back on the table when he’s home. One of the guys thumbs through the leather square and takes out rectangles and more rectangles and then tells the other guy, “No cash.”

“Then we have to sell those fucking cards fast.”

They yell at him and he understands “Go away!” But he hasn’t told them about his Master’s warm lap yet.

One of them points a square thing at him. It’s black. Herman knows what this is. His Master had one, and when he pointed it, it would go BARK and make fire and make things have holes in them, like the hole in his Master’s face.

Herman didn’t want a hole in his face, so he backs away. BARK BARK BARK GRGRGRGRGR.

The men keep going. They don’t make a hole in Herman and they ignore him.

Herman waits outside the door. Not his house, but he’s been there a lot. They keep Herman’s friend, a lady German Shepherd named Heidi. She is a big dog and he likes big dogs.

The door opens and Heidi comes out.

Heidi sniffs the ground. “You know. Got to pee.”

“You want to help me? Someone made a hole in my Master and he’s dead.”

“That sucks. No more warm lap.”

So Herman and Heidi bound off into the woods together on the heels of the guys who made a hole in Herman’s Master. They smell terrible, so they are easy to find.

When the dogs see the guys putting the shovel into the trunk of a car, Herman says to Heidi, “That’s them.”

“You want me to bite their balls?”

Heidi launches towards the guy who pointed the firemaker at Herman. Heidi clamps her jaws onto the guy’s crotch and locks her jaws and there’s no getting her off.

The guys hits Heidi in the face but it doesn’t do much good. He fumbles with his firemaker and hits her with that, but it’s no also no good.

Herman watches, then he sees the other guy get a firemaker and aim at Heidi. Herman doesn’t want him to make holes in Heidi so he goes BARK BARK BARK GRGRGRGRGR BARK! to warn her. Herman jumps up on the legs of that guy while Heidi shakes her head with the balls in her mouth and tears skin. The other guy, with Herman hopping around him, gets confused and points his firemaker at Heidi, but the guy with Heidi whips around and the firemaker makes fire and makes holes in the back of the first guy rather than in Heidi, and Herman is very happy about that.

The guy with holes in him drops to the ground. Heidi lets go. She runs over to Herman. They sit and watch.

The other guy approaches the fallen guy. “I’m sorry, oh fuck, oh god. I was gonna shoot the dog, I swear.”

Fallen guy rolls onto his back, firemaker in his hand. He makes fire and makes a hole in the other guy’s face.They don’t move anymore and they stink like they made poopies.

“I need to go back and sit in my Master’s lap.”

“Sure. Don’t take that shit for granted.”

Heidi runs back through the woods while Herman walks over to the fallen guys. They stink too much. So he finds a trail back to his Master. Herman digs some more. He wants his Master’s fingers because under the skin there are bones, and he thinks his Master would have wanted Herman to take his bones. So he finds the cold hand, lies on the ground beside his Master, and gnaws on his finger bones. But he really wishes his Master was alive because he is cold and the fingers are cold and he really misses his Master’s warm lap. 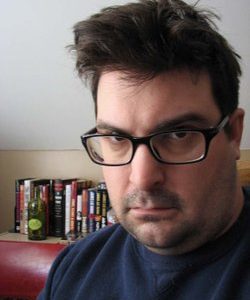 Anthony Neil Smith is an asshole. He is Herman’s master, but he’s not dead. Just a story, people. He’s the Director of Creative Writing at Southwest Minnesota State University, and the publisher of PLOTS WITH GUNS. He wrote some novels: PSYCHOSOMATIC, THE DRUMMER, YELLOW MEDICINE, HOGDOGGIN’, and an e-original called CHOKE ON YOUR LIES.
Herman is the inspiration for Herman Dog. He probably would gnaw on his master’s cold, dead bones. Otherwise, he’s a sweet pup. He’s half Boston Terrier and half French Bulldog. He likes kibble, giant cow bones, and big dogs.