Her Bathrobe, White and Soft

When he stumbled upon them, he thought they were just having sex and that he caught her cheating on him. He went over early because he wanted to apologize in person for calling her sister a bitch. He meant it when he said it, but when she hung up and the conversation floated in the air of his mind, it replayed with more emphasis and malice on the word until he lost sight of the truth.

“You know how she is,” She said on the phone. “She’s impulsive. The grass is always greener, I’m used to it.”

“I get that,” He said. “But just because she’s a bitch doesn’t make it okay for her to treat you like..I dunno, like ungreen grass!”

“Jesse, I’m hanging up now, I have to charge my phone.” Then she was gone. Everything went straight to voicemail. He wasn’t supposed to be there until after dark to pick her up for the drive-in, where they would drink through the first feature and fool around through the second. They’d be covered in sweat, dehydrated and sticky, rolling down the windows to let the cool air lick their sweat and sober them up. Both drinking from one straw. Cherry Coke never tasting so good. That was the plan – but the reality was Jesse on his couch rubbing his palms over his eyes, selectively remembering the conversation through a distorted haze of anxiety, like a scrambled TV signal, glimpses of something real, but even then it was all blue and distorted. His hairline tingled as the pores opened, prickling with embarrassment. The car keys on the table telling him to make it right.

Her door was slightly open when he got there, but it wasn’t unusual. She’d unlock the door so she wouldn’t have to get up or rush out of the shower when she was expecting company. The room was dark and the sharp angle of the blinds cast streams of yellow and orange onto the floor as the sun sunk lower in the sky, dust dancing in the beams. The TV cast a blue glow into the room, illuminating a half-eaten sandwich on the coffee table. Muffled sounds came from the hallway. Jesse walked quietly on the carpet around the corner to the bedroom. Two bodies, backs to the door, in the throes of passion. Her face-down on the bed, face mushed into the pillow. Moaning. Naked. Him, with his boots still on, jeans around his ankles, holding her wrist, hand in her hair. The bathrobe he bought her last Valentine’s Day under his feet. White and soft. Strewn on the floor in passion. His stomach turned and knees started to give but he made it back to the couch in the blue glow of the TV. Crumbs on the table in front of him. Sitting there listening to them in their bliss he ran through the idea of ripping him off of her, calling her a bitch. Punching him. He looked at the door which begged him to leave. Just drive. Or maybe just sit and wait for them to come out, sitting there finishing her sandwich. Calm, smug and righteous.

The noises got more violent. The moaning to crying. Hard fleshy smacks. The man cursing at her. Jesse was already down the hallway by the time he heard her yell for help. The man had his hands around her throat. Jesse dove on him and the two tumbled off the bed onto the floor. The scramble to their feet was clumsy and it only took the one sloppy off-balanced punch to send the man tripping over his pants into the mirror above the dresser. Knees locked and eyes rolling upwards, he fell with no attempt to break his fall.

“We have to call the cops.”

“Okay.” She said, trembling, looking at the man coming to life on the ground. Pants still around his ankles, laying naked among the shards of broken glass. She picked up a shard of mirror, looking her reflection in the eye. “But first.” 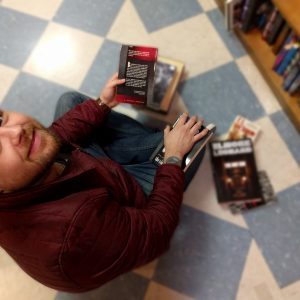 Joshua Murray is a graphic designer from New York. With a love for hard-boiled fiction and crime films from the 60s and 70s, he stopped his pursuits of becoming a pastor and started writing crime fiction. Perpetually looking for adventure and a place to play pinball, Josh spends the rest of his time training jiu-jitsu, throwing yo-yos, and counting the days until Baseball season starts up again. He currently lives on Long Island with his girlfriend and their fat cat Ned. He plans to start work on his first novel, if he can stop putting it off until tomorrow.