He was a good kid.

I know there’s going to be other folks that tell you different, but I don’t care. My son was a good kid.

He had his problems, yeah. Every kid does. All my other kids did. All ten of them. Andre was the youngest. My baby. I never told anybody this before, but he was probably my favorite. Don’t tell that to the rest, huh? It won’t help nothing.

He used to go with me to work. In the summers, after school let out. Get up early, take the train downtown. I thought it’d be good for him, you know, seeing the way other folks live. Give him something to strive for. Dell would let him sweep up the shop sometimes, do some dishes in the back every now and again. Run the trash outside, that kind of thing.

Andre, he wanted to be a barber when he grew up. Anybody tell you that? Have his own shop right here in the neighborhood. Said he wouldn’t forget his old man once he got to be big business – save me a job sweeping up, something like that. He could be a sweet kid that way, sometimes.

We used to come down here a lot. Not so much lately – not like we used to, anyway. Every Sunday after church. We never kept anything, not coming out of this water. Just catch and release. All afternoon.

I like it here. It’s real peaceful – you’d hardly know you were still in the city. A good place to come and get your thoughts right. Just fish and think.

I’ve been doing a lot of that lately. Thinking. Trying to make sense of everything. Hadn’t had much luck with that, though – not much sense to be found in a fourteen-year-old boy shot in the back of the head, is there?

The Mayor told me that. When he stopped by the house a couple days after. Told me that he was going to be personally responsible to find out what really went down that afternoon. It’s been a couple of months now – I’m still waiting. Is it too much to hold a man to his word? Maybe I’m crazy. 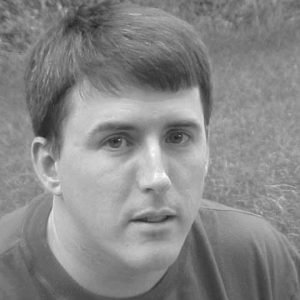 Frank Byrns lives in suburban Maryland with his wife and children, where he writes short stories and comics about superheroes, outlaws, and sometimes baseball. His crime fiction has appeared in such places as Plan B Magazine, Beat to a Pulp, Everyday Fiction, Powder Burn Flash, and Shotgun Honey. His most recent collection of short fiction, Adonis Morgan: Nobody Special, is now available from Pro Se Press. Visit him online at www.frankbyrns.com.