“Go easy on him, Frank,” Stephen said, a little bit of a whine edging into his voice.

But Frank wasn’t hearing it. His blood was up — as they say.

The kid, barely out of his teens, had both of his hands up in a defensive gesture, but Frank’s fists, as big as a catcher’s mitt, battered through them and struck home. A left caught the kid in the side of the head, jarring him, but the right hit him square on, knocking him off his feet. He fell back, striking the corner of the aging brick building, and ended up face-first in the dirt, gravel, and broken glass littering the alley.

“You think you can steal on my beat?” Frank hissed out. He moved in over the kid, fists up, poised like a boxer, his weight balanced evenly on both of his feet, his shadow enveloping the kid like a blanket. The kid looked up, a pathetic look on his face as blood oozed from his shattered nose.

“You gotta back off!”   Stephen shouted as he grabbed Frank by the shoulders and tried to wrench him away. Frank shot out a tree trunk-sized arm and caught Stephen in the chest, knocking Stephen aside like he was made of balsa wood.

“You little fuckers. You come down here and think you’re hot shit,” Frank said, sending hard sole shoe into the kid’s side.   The kid grunted and rolled away.

“Frank, you need to back off,” Stephen yelled. “If you don’t, I’m going to have to report you to the Captain.”

Frank whirled around and shot Stephen a molten hot stare. “You’d do that. You little pussy piece of shit. What are you? My third partner in two years? I don’t need you and I don’t need the fucking Captain.”

“What are you going to tell your wife when you’re fired?”

“I don’t have a wife,” Frank spat out. “Not any more. She left me two months after you started riding with me.”

“Is that why you’re always pissed off?”

“Don’t try your psycho-babble bullshit on me.”

The kid got to his feet and wailed, “I didn’t take no car stereo. I was at a concert.”

“Don’t feed me that bullshit,” Frank said wheeling around on him, his voice a low growl. “Why did you run when you saw us?”

“You’re a fucking thief,” Frank interrupted. “A thief on my turf.”

“You’re not hitting me no more,” the kid said as one his hands disappeared in his pants pocket. In the next instant he had a knife out in flash of hard silver. He made a quick jab at Frank, but Frank dodged easily as he pulled his night stick. In a fluid and vicious movement, he brought the night stick down on the kid’s wrist, breaking it like a popsicle stick. The kid howled in pain, dropping the knife, but Frank wasn’t done. His night stick arced down, but circled back up over his head, then fell again.

Stephen never spoke of it. Ever. The sound of it hitting the kid’s skull was like a five-pound sledge slamming into a watermelon made out of marble — hollow, but substantial. The light went out of the kid’s eyes in that next instant and he dropped into a lifeless heap.

Stephen lost the next several minutes, the world blurring, not fully comprehending what had happened. Frank stalked the scene, panting like a bull.

Stephen finally pulled himself together, knelt over the kid and checked for any vital signs, but found none. He did find a concert ticket that had spilled on out of the kid’s pocket when he pulled the knife. Stephen picked it up and held it out to Frank.

Frank reluctantly took it, looked at it for a couple seconds, then wadded it up, and tossed it at the kid’s feet.

“That don’t mean shit,” Frank said through heavy breaths. “Maybe he didn’t take stereo, but he sure as shit was guilty of something. They all are.” 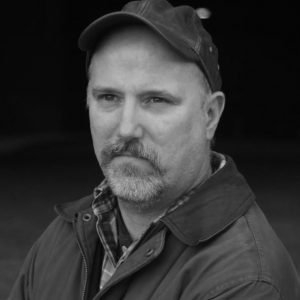 R.J. Spears lives in Columbus, Ohio and writes mystery/crime and horror fiction.  His stories have appeared across the web at Shotgun Honey, Out of the Gutter, the HorrorZine, and Flashes in the Dark along with several other sites.  His novel, Sanctuary From the Dead, was published by J. Ellington Ashton Press.  His first two books in his Forget the Zombie series, Forget the Alamo and Forget Texas, are available on Amazon