We had two coppers, a shotgun and a dog named Rags on our tail. I only knew that because his overly enthusiastic owner kept howling, “Get ’em by the balls, Rags!” as we tore along.

Small town, big money, smash and grab, said Chet. Easy peasy jalfreezi. I glanced his way. He ran flat out, hat long gone, cursing a mile a minute and wiping the blood across his face.

The little corner shop had been flush and the counter kid compliant. We hadn’t counted on the owner, a squat little brown man with a big gun and a chip on his shoulder. He screamed about the ‘bastard ghost land’ and ‘defeatist lowlifes’ as he brought the rifle up. It made a hell of a noise. Chet caught some of the spray in his face which bled like hell. His eyes popped wide as hard boiled eggs and he returned fire. The little man went down.

How were we to know there was a donut shop next door?

So we legged it, turning corners, gathering fans and I was beginning to think I’d have to break down and call that prick bastard cousin of Louise’s for legal advice, when we lucked on an alley of doll-sized back gardens. Chet suddenly turned and stepped through a doorway as if he did so every day.

We clattered into a tiny kitchen with cracked lino and a fresh smell of bread — and a very surprised looking young woman feeding a wee one in a tall chair. “You–”

“Not a peep,” Chet said, brandishing his gun while he wiped more blood from his face.

“We’ll just be a short while,” I added. She looked frightened enough to jump out of her skin. The boy looked no more than two or three, a chubby faced sprite clad in Pokemon jammies. He stared up at me and Chet, then rolled his gaze back to his mother.

I hoped he wouldn’t cry.

Chet didn’t just hope. “That brat cries, I waste you both.”

I had spoken to Chet before about his lack of people skills to no avail. The woman got that hard look I expect lionesses get when a hyena pack circles their cub. “What’s yer lad’s name?”

She looked at me, back at Chet and answered cool as an ocean breeze. “William.”

“Hello William,” I said, waving at the wee man. He looked up at me curiously. Curious was better than blubbing.

“Les,” Chet began, then cut off his objections as we heard the rumble of our pursuers down the alley. We crouched down. The door we’d taken still stood ajar. The woman hummed a soothing song under her breath and held another spoonful of porridge out to our man William, but he kept watching me and Chet. We were watching the posse. They’d picked up a few more stragglers. Apparently there was not much doing in this town on a quiet morning.

More people should mind their own business.

The cops, the dog, his owner and a pair of would-be thug types all jogged past. I had a bit of nerves about the pup, but Rags ran past, tongue lolling and never gave a sniff.

I breathed out and gave William a wink. “Looks like we lost them. Shall we head back to the car and vamoose?”

Chet shook his head. “Let’s hunker down here for a bit.”

The woman frowned. I piped up, “Aw no. Let’s get moving. I don’t think this town holds much luck for us, apart from — well,” I nodded at the hold-all Chet held.

“No,” Chet said in a way that put some ice in my veins. He smiled at the woman and moved over to her, grabbing her waist. “I think we’ll idle a while longer.” He rubbed himself against her backside, laughing.

A lioness would have admired her speed. She grabbed Chet’s gun hand, crossed it over her shoulder and pulled the trigger, taking off Chet’s face.

So I’m hiding under William’s pile of soft toys while they do the house-to-house. Quite a gal; had a bit of money troubles though.

About K. A. Laity 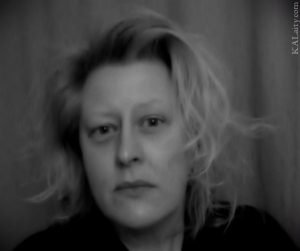 K. A. Laity is the award-winning author of A Cut-Throat Business, Lush Situation, Owl Stretching, Unquiet Dreams, À la Mort Subite, The Claddagh Icon, Chastity Flame, Pelzmantel and Other Medieval Tales of Magic and Unikirja, as well as editor of Weird Noir and Noir Carnival. Her bibliography is chock full of short stories, humor pieces, plays and essays, both scholarly and popular. Dr. Laity has written on popular culture and social media for Ms., The Spectator and BitchBuzz, and teaches medieval literature, film, gender studies, New Media and popular culture at the College of Saint Rose. She divides her time between upstate New York and Dundee.