“Stop me if you’ve heard this one,” I said.  A few clouds grazed lazily across a field of stars.  They lumbered onto moon, and the world went dark.

The only sound was the thud of the shovel.  Back in the old days, when they would have gotten $20 each to dig a grave, that joke would have killed Tanner.  I threw a couple more loads of dirt, climbed out, and sat down next to the hole with the last two beers from the truck.

Tanner paused and stepped, heel to toe, around the edge.  He’d grown early – one of the reasons Sports Illustrated attributed to his success – his foot being just over one-foot long by the time we were fourteen.  He measured twice, tossed his shovel out, and pulled himself up beside me.

“I can’t believe I killed him,” Tanner said, rubbing his forehead.  The moon peeked through just enough to shine a small sliver on his mud-encrusted World Series ring.

“It was an accident.”  I finished off my beer and pulled out a tin of chew, for old times’ sake.  “Could have happened to anyone.”

“It’d just been so long, you know.  Like, what – 10 years?  I was gonna go straight to my Aunt’s, but when I drove in and saw Humphry Hill…I…I just wanted to take a look.”

I spit, and nodded.  “Big Mac’s been sticking close to that hill at night, on account of losing his leg to a coyote a few years back.”

“He didn’t even move.  Just looked at me with his one good eye.”  Tanner swallowed hard.

“He was living on borrowed time anyways.  I mean, he was old when we were kids.  My dad has a photo with him on his first day of Kindergarten.”

“They wanted me to take a picture with him tomorrow.  For the billboard, you know.”  He jerked his head towards the highway.  The shell of the sign was currently covered with a sheet – lumpy from the cutout of the letters reading “Birthplace of Tanner Gibbons” – in preparation for tomorrow’s ceremony.

I spit again, stood, and brushed off my jeans.  “Well, let’s get at it.  We need to get your vehicle cleaned up, too.  Can’t go to your party with guts in your grill or blood in your bed.”

“Thanks again for the help, man.  It’s been too long.”

I shook his hand.  “What are friends for.”

We got beneath Big Mac.  Fortunately, the old Holstein wasn’t more than skin and bones, and it wasn’t much of an effort to hoist him into the hole.  Tomorrow morning I’d come by with the cultivator – I needed to do this section in the next day or so anyways – and soon it’d look like all the rest of my family’s fields.

As we dumped the dirt back into the hole, Tanner asked, “Should we say a few words?”

“Sure, do you know any prayers for a cow?”

He gave a smile, like he used to do right before we’d find some trouble when we were kids.  “What did St. Peter say when Big Mac got to the pearly gates?

“The steaks have never been higher.” 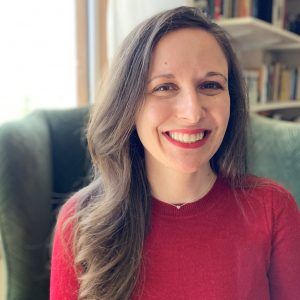 Raised in her family’s clothing store in Grand Forks, North Dakota, Amanda Silverman Kosior is the award-winning author behind North Dakota Nice (NorthDakotaNice.com).  Amanda lives out on the prairie with her husband and two sons, and considers herself one of the foremost experts on ranch dressing.  She can be reached via her weekly email at North Dakota Nice or on Twitter at @MrsAmandaGail.