Arthur sat at his desk, finger pecking away at his computer keyboard like a chicken tossed shelled corn. As he typed, his furry eyebrows did the work of a silent metronome, rising up then down, up then down.

“Conclusion,” he typed. “Because biting off the tip of a fellow’s nose does not meet the legal definition of ‘great bodily harm,’ the complaint alleging that Mr. Dodd committed first degree assault against Mr. Franks must be dismissed. Certainly, Mr. Franks received some bodily harm, just not of a ‘great’ nature.”

Arthur leaned back in his chair to admire his handiwork, then printed his motion and memoranda of law, placed the still-warm papers in a thin folder, and locked up for the night.

He glanced down at his Timex. 1:53 am. The number 16 bus would pull up in 4 minutes. Arthur stood waiting at the bus stop, whistling Garfunkel’s “Bridge Over Troubled Water.”

The bus arrived and Arthur took a seat above the wheels at the back of the bus. The bus jerked and roared down University as Arthur sat watching the neon signs of establishments that remained open, and then abruptly stopped in front of the pink lights of Topless Tequila at University and Monterrey.

Arthur watched as a man tottered out of Topless Tequila, miraculously sauntered to the bus like a cooked spaghetti noodle, then stepped inside.

The man staggered to the back of the bus and sat on the bench immediately facing Arthur. The bus again jerked down University. The new rider appeared to be staring out the window behind Arthur, entranced.

But then suddenly he arose from his seat, put his bearded head directly in front of Arthur’s, and stood there breathing heavily.

“You don’t remember me do ya?” the man asked, each effervescent word almost choking Arthur with the smell of Ron Diaz.

“Maybe in yur line of work it’s easy to mash us up, swaller us, and then regurgitate us without rememberin the bitter taste we left in yur mouth, but I’s remembers all!”

“I’m afraid you’re going to have to give me more to go on good sir.”

“The Friggman trial. Three years ago. He chopped off me hand at Topless Tequila. They charged him with first degree assault. You represented that monster. Told the jury it wasn’t great bod’ly harm. Said I still had one good hand. Said maybe I couldn’t give the ladies Washingtons with me left hand while touching me Willy with my right, but I could swap back and forth. You got him off! And you know what he done after that! A year later he finished the job. See!”

With that the crazed man lifted his arms to reveal two stubs where his hands should have been.

The man leapt toward Arthur with teeth bared and mouth open. He was going for Arthur’s throat. Arthur deftly raised his folder and positioned it in front of the man’s progressing teeth. The man’s mouth collided with the folder and he bit down upon it like a police dog on a burglar.

The bus driver saw what was happening in his rearview mirror. “Arthur, toss him out” he yelled, opening the back door.

In one deft motion, Arthur seized the man by the throat, lifted him off the ground, and tossed him out the back door, recovering his folder in the process.

“I don’t know why you keep riding this hell hole, Arthur” said the bus driver, continuing his descent down University. “It’s a strange and terrifying world out there.”

“That it is” responded Arthur, more to himself than anyone else. “That it is.”

When the judge began reading Arthur’s motion and memorandum of law the following day he was surprised to observe deep teeth marks on the pages. “Another of Arthur’s crazy stunts,” thought the judge. “What a coot.” Then he handed his clerk a note that simply said “motion granted.” 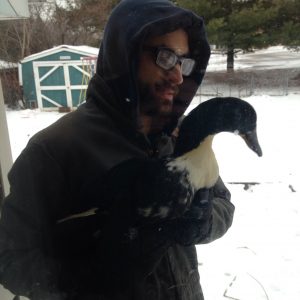 Jeffrey Wald is an attorney, husband, and father of three young boys who lives and works in the Twin Cities. When not outdoors camping with his family or tending his rabbit/duck/chicken/vegetable urban homestead, he enjoys writing, reading, and telling stories.