“Your uncle would never kill himself.”

I looked at my aunt, prim and unforgiving, sitting under the willow tree, the shadows of leaves dappling her like splatters of blood. She placed down her iced tea and stood up stiffly. Sunlight glinted off her glasses obscuring the expression in her eyes as I led her towards the barn, its doors yawning open in the bright afternoon.

Inside, the body of my uncle hung from an overhead rafter casting grotesque shadows on the barn’s shelves and their contents – old license plates, dusty martial arts trophies from his youth. A faint glimmering of light reflected off faded photos nailed to the wall.

No gasp of shock from my aunt. Instead, “What did you do to him?”

“What you loved was his money – his unquestioning generosity, but he was starting to see the error of his ways.” Her mouth tightened. “Don’t think I’m as gullible as he was.”

I rummaged through his tools carelessly strewn around the workbench. Sirens sounded in the distance. “I called 911. County police are on their way.”

“Unless he was totally ashamed of himself.”

“For what? Trusting his no-good nephew?” she scoffed.

“Maybe he couldn’t stand living with such a shrew anymore.” I slipped on a pair of bulky work gloves. “But after killing you, his guilt became too much to bear.”

Light dawned in her eyes as the claw hammer whistled through the air towards her – until she stepped aside and deftly twisted it out my hand. Almost tenderly, my aunt clasped my wrist until her grip suddenly tightened and she pivoted towards me. I soared through the air and landed on my back, winded and unable to speak. My aunt peered down at me through swirling dust motes. A decades old photo of my uncle garbed in his Taekwondo dobok looked over her shoulder. A glimmering of understanding came to me, too little, too late.

“How exactly did you think I met your uncle?” 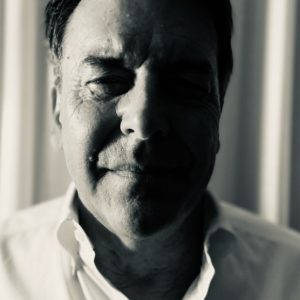 Blair Keetch is a mystery writer based in Toronto, Canada.

His short story ‘A Contrapuntal Duet’ was part of the 2019 mystery anthology, ‘In the Key of Thirteen’.

‘A Crunchy Kind of Death’ was featured in the July 2020 newsletter for ‘It Was A Dark & Stormy’ book club as well as his story ‘300 Miles to Murder’ in the August edition.

‘Sleep, Perchance to Die’ was part of the mystery anthology ‘Grave Diagnosis’ published by Carrick Publishing.

He is hard at work (when time and toddler permits) on his full length novel, ‘Flight Risk’.