Chavez wiped his forehead.  Josey’s knee bobbed like a sewing machine on a seam.

“I want a fucking lawyer.”

“Just cooperate, Josey, okay.  If you don’t we’re going to have a needle in your arm.”

“I don’t care to work with you, Josey, I don’t.  I can talk to the DA, get him to show you some love, but you gotta do something for me.  You gotta admit you killed him.”

“I gotta piss.  That’s what I gotta do.  I have been here all fucking day, and not even a cigarette.  Nothing.”

“She said you had it planned.  Said you hated that motherfucker.  That true, Josey?”

“And why would Samantha tell you that?”

“Samantha don’t talk to cops.  Especially not fat bastards like you.”

“Well, she did today.  You were in the car, handcuffed, and she started talking.”

“She wanted to know when you might be home.”

“Hope you told her soon, cause this shit ain’t gonna stick.”

“Then she wanted to see my gun, touch it, you know, shit like that.”  Chavez smirked.

“Let me ask you a question, Josey.  Did you hear Samantha moaning?”

Josey’s knee stopped bobbing.  “Keep it up, you fat motherfucker.”

“Remember when I got back in the car?”  Chavez paused, searching Josey’s eyes.  “Did you smell Samantha’s pussy on me?”

“She likes her hair pulled, too.  But you knew that, right?”

“What’s wrong? Huh?  You don’t like the thought of my dick in your whore?”

“I swear to Christ you’re going to die.”

“Here’s the thing, and I thought about this while I had your wife bent over, drilling her for a nut.  You don’t have murder in you.  You don’t.  That’s obvious.”

“Listen you cunt.  You want to know the truth?”  Josey raised his eyebrows.  “I’ll tell you the truth.  Just dare me to tell it, motherfucker.”

“You ain’t got the balls, Josey.  You ain’t even got enough balls to keep your wife at home.”

“You ain’t listening.  I said dare me.”  Josey stared.

“I’m asking you to tell the truth, Josey.”

“You lying piece of shit.  You’d lock your momma up for a pat on the back.  So get your dick outta the donut and dare me you cunt.”

Chavez stood and grabbed Josey by the collar, lifting him out of his chair.  “Fine, asshole.  I fucking dare you.  I know you didn’t do it, and I know you ain’t gonna admit it.  So just say it and we’ll end this.”

Chavez pushed him back into the chair.  “That’s what I thought, shitbag.”  Then he turned to walk out.

Chavez nodded.  He walked out, closing the door behind him.

“How did it go?”  Detective Newnun asked as Chavez sat down at the desk.

Newnun studied Chavez.  “How did you get him to do that?”

“You say whatever you gotta say to get them there,” Chavez said, rubbing his forehead.  “You know what I mean?” 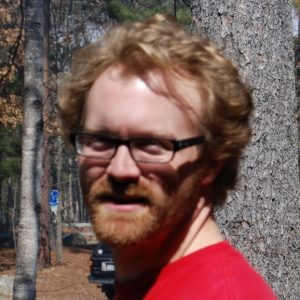 Brian Plemmons practiced criminal law for seven years before picking up the pen for good.  You can find his short fiction at Near to the Knuckle and Primal Urge.  He is currently working on his first novel.  You can find him on Twitter as @bkplmmns and on Google+.