David stood at an ATM outside of a run down, cash only gas station, admiring the Shepard Fairey sticker stuck over the camera. The station was surrounded by trees, much like everywhere else in West Virginia. He put his card in the machine when a man behind him asked for help.

“I’m sorry, I don’t have a lot right now and I’m still a few hours from home so—”

“Have a nice night.”

David turned to see who it was that needed help, but the man was already walking back to his car, both hands in his yellow hoodie. David withdrew his cash and the machine spit his card out to him. He made it three steps toward the shop’s door before he was stopped again.

“Put it back in,” said another man.

David turned to find a man in a ski mask with one hand behind his back. “What?”

“Your card, put it back in the machine. Give me what you took out too,” Ski Mask repeated, stepping closer to David.

“I’m not emptying my account because some guy said so.”

“You will if you want to stay alive,” said Ski Mask, pulling a handgun from his pocket.

“There’s no need for that.” David went back to the ATM. As he placed his card into the slot he cursed the OBEY sticker blocking the camera. How was he going to get his money back if he was the guy who withdrew it?

“Hurry up,” said Ski Mask, pushing the barrel of his pistol into David’s back.

David checked his account and found five hundred thirty dollars ready to be withdrawn. “How much do you want?”

“What kind of question is that?”

Despite the gun pressed up against his spine, David could not bring himself to finish his withdrawal. His finger hovered over the button to finish his transaction.

“Hey, stop,” shouted a voice from behind.

David felt the weapon rush away from his back. He turned to find the man in the yellow hoodie chasing after Ski Mask. Yellow Hoodie pursued Ski Mask until he disappeared into the trees.

With out a second thought David withdrew one hundred fifty dollars from the machine, and presented it to his hero by the tree line. “I can’t believe you did that, thank you.”

“No, I can’t take this from you. You said you’re still a few hours from home so—”

“You just saved my life, this is the least I can do.”

“I insist.” David held the three fifty dollar bills out to the Good Samaritan.

The model citizen hesitated for a moment before taking the money from David.

“Thank you again, I wish I could give you more.”

“This is more than enough.”

David went inside, paid for his gas, filled up, and drove back toward the interstate to continue his ride home.

“How much did he give us?” asked Ski Mask, stepping out from behind the pine.

“I don’t understand why we do this whole charade instead of just holding people up the traditional way.”

“Nobody calls the cops for almost being robbed.” Yellow Hoodie said.

“True, but it feels like a lot. You want to fit another one tonight?” Ski Mask asked, as he moved to pick up his gun up from the asphalt in front the ATM. “There’s a standalone machine down the road.”

“We have anymore stickers?”

“A whole box in the backseat.” 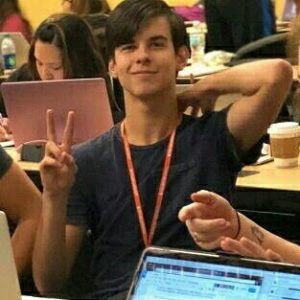 Joshua Wade Freeman is currently studying for a bachelor’s in Creative Writing for Entertainment and teaching himself the ukulele.