“Thank fuck,” she said. “That fuck was a real fucking fuck.”

Later, they were fucking. Mid-fuck she said, “You didn’t fuck his fucking fuck like the fucker said, did you? If you did, you’re fucked, you fucking fucker.”

He said, “I can’t believe you’d think so badly of me, honey.”

He was fucked. He looked at her and said, “Shit.” 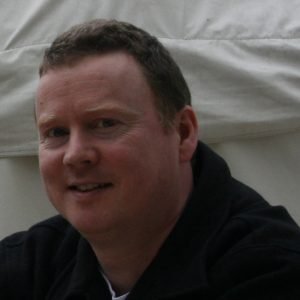 Allan Guthrie is a Scottish literary agent, author and editor of crime fiction. He was born in Orkney, but has lived in Edinburgh for most of his adult life. His first novel, Two-Way Split, was shortlisted for the CWA Debut Dagger Award, and it won the Theakston's Old Peculier Crime Novel of the Year Award in 2007. His second novel, Kiss Her Goodbye, was nominated for an Edgar Award, an Anthony Award, and a Gumshoe Award.