Occasional whimpers, interrupting the rhythmic sway of windshield wipers flinging steady rain, finally ceased as Johnson’s jalopy kicked up gravel settling into the earth.  Mrs. Johnson clutched the urn with a dainty right arm as he shuffled her to the front door by her left.  A bullet to the leg placed by a startled burglar saw to the shuffle in good times and in bad.

This was the third…the last, too old and tired to start again–the first two buried in the backyard by a younger man’s vigor.  With the recent pet clinic offering cremation, it only made sense.  The high-tech facility quickly put the smaller veterinarians out of business.  Even Johnson was forced into taking his beloved despite a devotion to small businesses.

“I need to lay down, Dear,” Mrs. Johnson said while removing rain boots and heading for the stairs.

“I understand, Faye.  I will be in the study.  Just yell if you need anything.”  Johnson always addressed his wife by first name.  She found it more endearing than a pet name.  The former private office remained on the first floor of the two story, humble home.  He placed the urn on a mantle above a frequently used fireplace and gazed.  The loss had hit him hard as well.  Now an aging man, he accepted not having children long ago.  This was his final baby, resting in a container.  He moved to a desk littered with word puzzles.  After minutes unable to concentrate, he poured a bourbon and procured a file folder from a bottom drawer.  While setting it atop the puzzles, a painting on the wall captured his attention.  At first glance, one would be absorbed in tranquil waters.  It was hung during his law days, a reminder that just beneath the peaceful surface, the unknown lurks.

Removed as sheriff, Johnson transitioned quite nicely.  Never one to fall victim to boredom, he kept busy with hobbies.  Most of all, he took comfort in the knowledge that he did a damn fine job protecting the quaint town.  Ultimately, his body simply couldn’t take it anymore.  It seemed as if overnight, he turned into a tired old man.  Beneath self-assurance, one reservation did occasionally eat at the back of his mind–cocaine was on the rise during his final year as sheriff.  Just one year later, the town now seemed to be polluted with the narcotic.

He skimmed through the file comprised of hand-written notes targeting entry points and nearby possible manufacturers, photographs of convicted drug offenders, and jotted down theories.  He exhaled, feeling the guilt of its secrecy.  “Give it up old man,” he said aloud.  It was settled; the file would be transferred to the station first thing in the morning.  Satisfied with the revelation, he closed the cover, pressing a photograph of a low-level gangster known by, Buster.  He looked up at the urn and said, “Come on old friend; let’s go for a walk.”

After making sure Mrs. Johnson was sound asleep, he walked about a half mile to a little pond, a favorite place to share with his companion.  Endless hours once passed tossing a tennis ball into the shallow water.  Johnson decided this was a proper resting place.  After saying a prayer, he pried open the top.  As he sprinkled, a gust of wind kicked the white remains into his face.  A quick closing of the lid trapped what was left.  He lightly inhaled and licked his lips, feeling the numbness of the high-quality powder against his gums.  He dusted himself and closely examined the urn.  Running his fingers over the engraving of fancy script revealed the name, “B-u-s-t-e-r.”  A chuckle ensued, “Baxter, I apologize for the oversight in my time of distress.”

The lawman was reborn.  A determined shuffle set in motion to acquire his rightful ashes while silencing a final question.  It needed to be done expeditiously…the missus would soon wake. 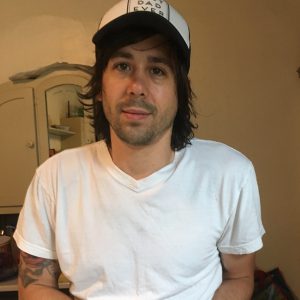 Nicky Tomsko is an elementary teacher from Pennsylvania.  Most of his time is spent with his wife and daughter; however, late into the night Nicky can be found reading and writing mystery/crime stories.  Some of his stories can be found at Mystery Tribune Magazine, Short-story.me, and a couple microfiction magazines.