Frank was a Junior. Hated it from the day he learned what “junior” meant. Frank Senior drove like he’d wrapped the car in eggs. Junior drove like Hell closed in ten minutes, the St. Christopher statue his ma gave him hanging on to the dashboard for dear life. The old man nibbled around the periphery of life; Junior headed straight to the top.

That’s how he met Marti—Martha, her mother called her, why Marti left when she was sixteen. She gave him the usual, “I don’t usually do this the first time I meet a guy.” He told her, “You close that door behind you and we’ll do a lot of things you don’t usually do.”

She had to work in the morning. “Please wake me up.”

Frank snorted. “Wake yourself up. I’ll be gone.”

He wasn’t, though. Marti woke up and he was there. Sleeping on his side, eyelids fluttering. Mumbling something she couldn’t make out. He opened his eyes and saw her looking at him.

“Your face. It’s different when you sleep.”

Marti thought a few seconds. “You were dreaming. You’re innocent when you dream.”

Frank drank. He smoked. He snorted. He sped. He walked into rooms full of people and made them wonder if they were about to regret things they’d forgotten they’d done. Yesterday is here. Pay up, bitch. Told Marti to call in sick, breakfast on him. He knew a place. She said the weather was bad. He said let’s go.

More than rain came in when Frank opened the door. Hail, sleet, whatever. Marti shrank back. Frank stepped into it. Shook his fist. “Come on, blow wind. Blow.” Speeding at eight in the morning.

Everyone knew him. Everyone said hello. No one looked like they wanted to. Frank acknowledged them all. “Yeah.” “Sure.” “Uh-huh.” “Go fuck yourself.”

Frank stood. Pointed to the empty plate. “Take care of this. I’ll be right back.”

Marti said, “Where are you going?”

Frank turned for the men’s room. “I got a telephone call from Istanbul. Need some privacy.”

Marti paid the check. Frank did three lines off the lid of the toilet tank. Nine in the morning. Came out of the shitter wired. Took Marti by the elbow. “Let’s go.”

Took her outside. The rain had stopped. The sun tried to come out, not hard enough. Frank opened the driver’s door. Marti held back.

Frank said, “Get in,” like those might be the last two words she’d hear from him. Marti got in.

Frank started the car. Turned on the sound, all the way. Tom Waits. Frank’s Wild Years. Frank’s musical theme. Music too loud. Waits singing Cold Cold Ground. Where they put Frank when the Waits song drowned out the train song.

Marti came to the funeral. She made three. Esther was there. Some guy. No one said a word while two workmen put Frank way down in the hole.

Everyone left together, separately. 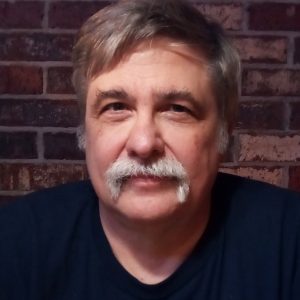 Dana King has earned Shamus Award nominations for two of his Nick Forte novels, A Small Sacrifice and The Man in the Window. He also writes the Penns River novels, of which Leaving the Scene is the sixth. His work has appeared in numerous anthologies, most recently The Eviction of Hope. You can get to know him better on his website, blog, Facebook page or Twitter (@DanaKingAuthor).