“Eric Skor? May I have a moment of your time?”

“I was just eating.” The large man at the door licked his thick fingers.

The fastidious door-bell ringer twitched his nose and sniffed. “Curry, if I’m not mistaken and I never am. Just what I wanted to speak with you about.”

Eric Skor shrugged his immense shoulders, opened the door wider and walked deeper into his house. “Still going to eat.”

“Certainly. I wouldn’t want to deprive a working man his supper.”

The man followed Eric into the kitchen where a round table for four had one steaming plate of wet yellow mash, one beer bottle, and a fork. Eric sat down and commenced to eating. The finicky stranger’s eyes inspected the kitchen. He walked meticulously along the stove, ran a gloved finger down the kitchen counter, paused at a block of steak knives and finally settled on the spice rack.

He slid spice bottles out checking the labels. One spot was empty. The stranger turned to the feeding homeowner.

“You haven’t asked my name.”

With a fork full of yellow mush in his mouth, Eric shrugged again and mumbled.

“I am Doyle Baker. I’m an unpaid consultant for the police. Gives me certain legal latitude which means I follow no master except justice.”

Baker walked over to the lidded trash can and stepped on the foot pedal to release the lid. He peered over the edge and reached inside pulling out not one but two empty glass spice bottles. He smiled holding up his two finds and brought them over to the table.

Eric kept watch but didn’t slow down eating. Doyle held the chair posturing for an invitation to sit. Eric nodded. Doyle sat as primly as he had entered and inspected. Eric chortled.

Doyle’s fancy smile vanished. “You were questioned about the Browning family murder this morning but not detained. Detectives routinely question service people. Landscapers, exterminators, commercial painters, and the ilk. You just painted their house a couple of weeks ago.”

Eric nodded at the strange man, finished his last forkful of yellow mush and belched.

“Quaint. Curried lentils, yes? I have IBS so nothing spicy for me.”

“You said you liked curry at the door.”

“I appreciate the scent. It tickles the nose. Very fragrant. I caught a whiff of it at the Browning crime scene but when I looked in their kitchen no spices except the pedestrian salt, pepper, and a BBQ rub.”

Eric wiped his mouth with his shirt collar. “So?”

“When I and my associate Boswell arrived at the police station, you passed us in the foyer. Your pungent aroma was unmistakably tinged with curry.” Doyle tented his fingers in front of his face. He stared over them at Eric.

Eric sucked at a lentil shell stuck in his tooth. He took a pull on his beer and swished it around in his mouth before swallowing.

“Where is your associate now?”

“Boswell? Should be here in a moment. Parking was dreadful. He dropped me off to find a spot.” Doyle picked at some lint on his tweed waistcoat.

Eric swiped the curry bottles off the table towards Doyle. He lunged across the table tackling the nebbish man chair and all. Eric pressed the other man to the floor capturing Doyle’s arms with his legs. Doyle cried for help but Eric covered his nose and mouth with the palm of his curry stained hand.

Doyle bucked and attempted to roll the thick man off. Eric didn’t change expression just bore down making sure to seal off any chance of air. He sunk his weight harder onto Doyle’s chest collapsing any breath left in his lungs. Doyle made a few gulping gasps and lay still.

While getting up, Eric brushed his hands clean of snot and spittle on Doyle’s neat waistcoat. He grabbed the bottle of beer off the table and finished it off.

A knock at the door. Eric put the beer down, palmed a steak knife from the block on the counter and walked to the front door. “Coming, Boswell.” 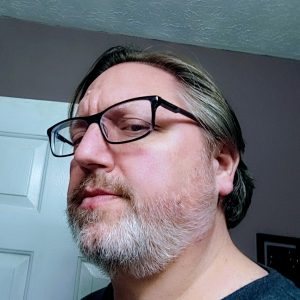 Rob D. Smith is a common man attempting to write uncommon fiction in Louisville, KY. His work has appeared in Apex Magazine and Switchblade Magazine. He co-hosts The Abysmal Brutes podcast that explores pop culture storytelling at https://theabysmalbrutes.podbean.com/ Follow him on Twitter @RobSmith3