Jimmy Gallagher did not throw fights. It was one of the few rules he lived by.

He never wore suits off the rack.

He never slept with married women.

And he never threw fights.

But he drank. And he gambled. And he drank while he gambled. So he owed money to Frank Diamond.

“How are we gonna settle this, Jimmy?” Frank sat behind his desk in the back of the Three Kings Lounge.

“I’ve got a good feeling about a horse,” Jimmy offered. He put a cigarette to his lips and searched himself for a lighter.

“Your good feelings are bad for my digestion. Besides, all bets are off for you until you get square.”

“Well that’s the door shut. Do I see a window opening?”

Frank struck a match and leaned over the desk. Jimmy met him half way and took the offering. Frank wasn’t a bad guy, just a little serious when it came to money. The Shylock’s Curse.

“Whalen’s been asking about you. He wants to try his luck in the ring.”

“He’s tough, but he’s no Jumpin’ Jimmy Gallagher.” Jimmy wasn’t so sure he was either. Frank went on. “I could get a lot of action for a fight like that. You take a dive and that would get you square and then some.”

“Frank, I’ll mop the toilets in this joint before I take a dive. I wouldn’t dive if you put Jesus Christ in the ring with me, and I sure as shit won’t dive for Jack Whalen.” Jimmy let that sit for a minute. Frank leaned back in his chair.

“Then I’m gonna have to put you to work.”

Jimmy banged his meat hook fist on the tenement door. He could hear kids on the other side. That made him mad. The Polack opened the door in his shirtsleeves. The smell of cheap gin wafted off of him like gasoline fumes.

“I’m a friend of Frank Diamond’s.”

“Oh.” The Polack had the good sense not to try to slam the door. One look and he could tell Jimmy could break it down with a huff and a puff.

“You have something for me?” Jimmy asked.

“You listen,” Jimmy cut him off. “Either you give me something or I give you something. And you don’t want what I’ve got to give.” The Polack’s wife stepped into view inside the apartment. The kids were running around back there.

“Mind your business!” her husband shouted at her. She said something in Polish that sounded nasty and huffed off. The place was a sty.

This fucking bum. Jimmy gambled, sure. He owed money, okay. But he didn’t have a wife and kids to take care of. He wasn’t half in the bag during the work day. He wasn’t weak.

“What’s it gonna be?” Jimmy asked. The Polack twitched.

“It’s right here.” The Polack went inside and Jimmy followed. He went to a bureau. Jimmy saw him open a drawer with his left hand as his right hand disappeared. When he swung around with a bottle in his hand Jimmy was ready. He dodged the blow, easy. Jimmy hooked him in the small ribs. The man doubled over.

“You goddamn bum,” Jimmy said. “Make me do this.” Jimmy grabbed him by the face and lifted him upright. “Piss ass drunk with kids in the house.” Jimmy thumped him right in the liver. The Polack hit the floor and puked on Jimmy’s shoes. Jimmy kicked his ribs so hard he flipped onto his back. Jimmy put a foot on the man’s chest. He was about to get nasty when he saw the kids watching from the other room. Big eyes. Dirty faces.

“Don’t make me come back.” It wasn’t a threat. It was a plea. Jimmy got all the way to his Caddy when he realized his hands were shaking. It was ugly work. But Jimmy did not throw fights. 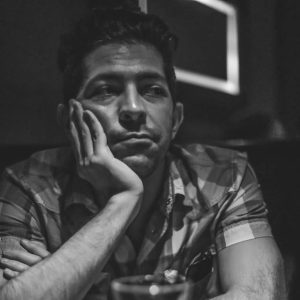 John Cooley has written many things. Screenplays, fiction, a One Act play, and some short films. None of it published. One short film called "CLAUDE" got produced and won some awards. That was five years ago. He's been coasting on it ever since . . . until now.