“Where the Hell is everybody!” screamed Primal Center.

“I think we need to take stock of what’s left and to make a plan,” said Intellect.  “Do either of you know what happened?”

“I heard gunshots, felt heat and pain as the bullets hit the chest, heard ribs breaking, the warmth of blood spurting out, the crash of the table overturning, the thud of the floor.  It was awful,” said S.

“I feel a burning pain in the occipital bone.  Maybe there’s a way out there,” said S.

“Are you communicating with the legs?” said S.  “Just checking.  I feel we’re almost alone here.”

“I’ve been trying to get some idea of what happened.   I think we were ambushed,” said I.

“Blood pressure’s getting low.  Are either of you getting oxygen?” said S.

“He makes an incredible amount of noise.  How do you cope with him?” asked Senses.

“It’s always been difficult,” said Intellect.  “We fight all the time.”

“Perhaps there’s some life left in the muscles,” said I.  “But, how do I get them to move?”

“I have an idea.  Maybe the arms can pull us somewhere,” said I.

“Here’s a plan.  Let’s tap into all that primal energy.  Reroute it to the adrenal glands,” said I.  “Something is bound to move.”

“Sorry, the arms are just slapping against the floor,” said S.

“I’m gonna get all my buddies and crush that bastard.  I wanna dig my fingers into his throat and rip it out.”

“Can we get anything to move?” asked I.  “Why won’t anything move?”

“God, I’m feeling so cold.  The floor is cold too,” said Senses.

“I feel He doesn’t work at the cellular level.”

“Wait.  I can hear screams in the distance.”

“Dammit.  My sperm are dying!”

“Blood pressure’s definitely about gone.  Oh my.  No more pulse.”

“I hope the kids get into college.  I put money away so she can’t get at it.”

“Strange.  I can’t hear anything now.  Do you think the bastard has gone away?”

“You know, I can’t feel the floor any more.  The cold has gone too.”

“I’m gonna get my gun and shoot that bastard square in the nuts.  Then I’m gonna take out his eyes, one by one.”

“Ok everybody, let’s get going.  It’s time for the Marines to storm the beach!  Let’s get that bastard and eat his gizzard!”

“Where the Hell is everybody?” 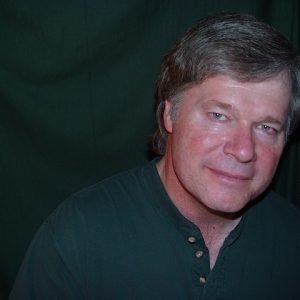 Michael Chandos is the pseudonym of a retired engineer who spent 42 years in space operations and engineering, and intelligence, the last at Air Force Space Command in Colorado. He's published in military history (see Psywar on Amazon) and in government documents that no one will ever see. He's active in independent films and volunteers with the Colorado Springs Police Department. He's a member of MWA, RWA/KoD and SinC, and has at least two stories out at any one time. This is his second story for Shotgun Honey.