Father of the Year

I’ve never won an award. Not once.

Hell, I ain’t no father of the year. I don’t have the coffee mug in the cabinet or t-shirt either. So, when I woke up, with my son and his friend’s standing over me with a revolver, I wasn’t shocked. I just hoped this was a dream.

They allowed me a moment to focus. The big idiot with the gun was William. I’d known him all his life. I’d even fucked his mother a couple of times when she needed rent money.

She was a peach.

William went by Wild Bill now or, some stupid shit like that. He leaned over me and smiled, right before he cracked me in the temple with the gun.

I let go of the possibility of this being a dream.

That shit hurt like hell and dreams don’t hurt.

Maybe Bill could tell I was thinking about his momma. That thought made me smile right back.

Really? Here I am, sleeping in my own recliner, in my own house and I’m the asshole? They wanted my disability check and my son knew I’d have it in cash. He knew I didn’t trust banks. The government wants your money, the bank hands it right over. These assholes missed their calling. They should be working for the IRS seeing as how they were doing that very thing right now. I could taste my own blood.

“I Spent it.” I looked at my son and wondered how much of him was left behind those hollow eyes.

“What do you mean, you spent it?” I looked back to Bill. “What can I say? Your mother came around last night. She charges a lot for that dried up old snatch.”

That did it. Bill went nuts. He must have clocked me a dozen or so times with that piece of shit gun before everything went black.

I’ve got no idea how long I was out. But, when I came to, I was on the floor and the whole crew was rifling through all my shit looking for my stash. They were tearing the place up. Granted, it wasn’t the nicest trailer in the lot, but, it was mine and it was paid for. I didn’t have to sell my ass like Bill’s mama did.

I let them do their thing.

Not one of them noticed me pull the 1911 out from under the coffee table. I rolled over on my back, squeezed the trigger and blew a hole through Bill’s back. His chest exploded like that scene from Alien. The rest of them just turned and froze. I took my time and shot each one of those idiots my son called friends. They fell against kitchen cabinets and end tables, breaking more of my shit. Then, finally they all dropped to the floor. My son just stood there with that same hollow look on his face. It was hard to tell if he was afraid I would shoot him next, or if he even gave a shit that all of his buddies were dead. Honestly, I didn’t want to know. I dropped my pistol and rolled back over.

“The money is in the pizza box in the freezer. Go on, take it and get out of here.” I just stared at the ceiling. I couldn’t bear to see his face.

That face. His mothers face.

He walked over and stood above me so I closed my eyes. Maybe I could’ve raised him up better if he hadn’t looked so much like her.

My head was pounding and my heart was broken. I was crying. I think I was crying before I even grabbed my gun.

With my eyes closed he sounded ten years old again. I opened my eyes hoping to see the face of that little boy I used to know. But, like I said, this wasn’t a dream.

Dreams don’t hurt, and seeing what dope had done to my boy hurt like hell.

Nope, I’ve never been father of the year. 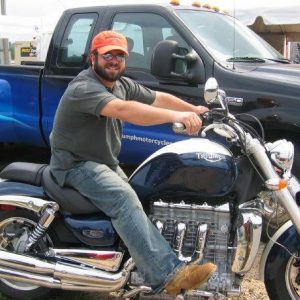 Tripp Nobles is a Flyfishing Comedian from the southeast U.S. His lack of success in this endeavor has propelled him to seek an alternative career as Trout are notorious for lacking all sense of humor.