Some men bowl, some fish, some play golf or tennis.

My father is a gambler.

Remember “Easy Money,” the old Billy Joel song? “Take me to the action, take me to the track, take me to a party if they’re bettin’ in the back.” That’s my dad: Jai Lai, the greyhounds, poker, craps, you name it, as far back as I can remember.

I don’t know if he’s a candidate for Gamblers Anonymous, exactly — at 90, he has enough trouble navigating the eight steps from the side of his bed to the toilet, let alone a full twelve steps — but he has the bug fairly bad, that much I can tell you.

I swear to God it was her name that first attracted him to Betsy Klein.

He calls her Bets.

She and her husband Harold lived two doors down from my parents at the Pocahontas Rest Home, and I suppose it was inevitable that, when first Harold and then my mom passed within three weeks of each other, my father and Bets would turn to each other for comfort in their loneliness.

Their December/December romance was a godsend for both of them. My father seemed lost without my mother, and, frankly, I was concerned about his financial future without her steady hand on his leash: back in the ’70s, he’d made a lot of money selling his small medical-testing laboratory to an international conglomerate, and I expect he’d’ve moved straight out to Vegas and gone hog wild at the tables if she hadn’t put him on a hundred-dollar-a-day limit and had the intestinal fortitude to make it stick.

And Bets? Well, Medicare only covered about a quarter of the cost of keeping her and Harold in the posh Pocahontas, and as I got the story their savings at the time of his death were about to run out and they were about to have to begin looking for a cheaper place to live.

So, six months after I put on a yarmulke for the first time in decades at mom’s funeral, I donned one again for dad’s wedding.

Afterwards, at the reception, as I slowly spun Bets around the dance floor to the tune of Frank Sinatra’s crooning, I leaned down and thanked her for saving my father from the malaise from which I had found myself incapable of lifting him.

And that sweet little old lady pulled me closer and whispered in my ear, “Wanna bet?” 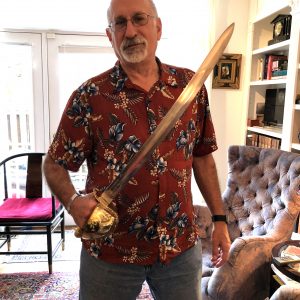 Josh Pachter‘s short fiction has been appearing in Ellery Queen’s Mystery Magazine, Alfred Hitchcock’s Mystery Magazine, and other periodicals and anthologies since the 1960s. In 2015, Wildside Press published The Tree of Life, a collection of his Mahboob Chaudri stories. He is the editor or co-editor of three anthologies that will be published in 2018: Amsterdam Noir (Akashic Books), The Misadventures of Ellery Queen (Perfect Crime Books), and The Man Who Read Mr. Strang (Crippen & Landru). In his day job, he is the assistant dean for communication studies and theater at Northern Virginia Community College’s Loudoun Campus.