For three weeks, Mrs. Graves waited in the shadows at the end of her crushed rock driveway for them to return. Each night, an hour after dusk, she took her position: opposite side of the amber-casting street light, behind the mailbox and a naked rose hedge. Three hours, standing guard.

Victim of beer bottles rifled from a white Chevy Volt with a scuffed quarter panel, her pride was taking as long to heal as her face. She reported the assault, of course. But with no plate number, no leads were generated. The case was shelved a month later. She wasn’t notified officially, but she knew. That wouldn’t do.

When I met Mrs. Graves, blue ripples of broken blood vessels still glowed under the wrinkled yellow skin around her right eye and cheekbone. Slight, but strong, the widow disclosed with delight the evening’s events.

Resignation beckoned. Her waiting game had proved as futile as her incident report. The end of her shifts yielded nothing but aching joints and bitter recollections of a life wasted in dusty fields. After three weeks, she was losing her gumption.

So, she gave it one last night standing guard, her wavy silver hair shining with moonlight while squeezing closed her husband’s shearling-lined coat to keep warm.

Then, while blowing thick condensation to a full moon, her ear caught a faint hum cutting through the clear night. The two-lane, farm-to-market blacktop vibrated. Lowering her head and unfolding her arms, Mrs. Graves cocked a rinsed Allsup’s salsa jar above her head.

Headlights prairie-dogged over the hill and anticipation clenched her body. As soon as the blue Prius penetrated the street light’s reach, however, she exhaled, dropped her hand and mumbled a despondent, “Oh sugar.”

“I was cooked,” she told me, an exasperated sigh chasing the words.

But seconds later, before retreating, the country road vibrated again with a similar hybrid-powered whine approaching.

“Figured, what the heck? I’ll wait for one more car.”

She dragged her left foot back through the dirt, raised the jar and held her breath.

“I was tickled pink when I saw a scuff of white paint.”

Her pose held a second longer, Mrs. Graves then put every ounce of her 105 pounds into the throw. The glass jar tumbled end-over-end, smashing into the base of the Volt’s windshield. The driver slammed the brakes, the smell and smoke of rubber filling the air.

Standing her ground as he flew from the car yelling, Mrs. Graves flapped back her coat and summoned more will than the previous 20 nights combined.

“Are you crazy?!” the driver screamed, ripping off his toboggan and stomping across the road at her. The street light illuminated his ruddy face and the moment one foot crunched on to her driveway, his furious eyes widened with horror.

Mrs. Graves stood cradling a shotgun across her body. She pumped and fired. The blast spun the driver around 180 degrees after it struck his outturned left hand.

“That’s where they found me.”

“With my boot on that whimpering coward’s chest,” she said holding up her cuffed hands. “When Sherriff showed up.”

Blue and red emergency lights lit up her front yard and the inside of the cruiser we were sitting in. I looked out the back window at two deputies talking. One of them made the universal sign for crazy and pointed at us.

I pursed my lips and looked at her. “The kid was begging for his hand—kept telling the paramedics to go back for it when they loaded him in the ambulance,” I said, pausing. “There was no hand to find, Mrs. Graves.”

She didn’t respond and looked out the window.

We would take her in, you can be sure. But she knew as well as I did, we wouldn’t keep her long or charge her with a crime. Her victim was on her property, after all.

With the smiling eyes of a grandmother, Mrs. Graves looked at me. “There were two of them that assaulted me with beer bottles, detective. You better find the other one… ’fore I do.” 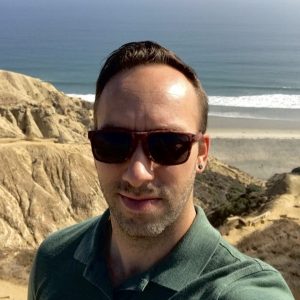 Curtis Ippolito lives in San Diego, California, where he's a communications writer for a nonprofit. He has a background as a newspaper reporter and has held a bunch of other writing and non-writing jobs over the years. Most of his fiction involves crime in one way or another. Connect with him on Twitter @curtis9980.