I remember the long thin bloodstain that had frozen into the ice in our backyard. It formed a dripping pathway from the bed of my uncle’s truck to the old dilapidated garage that had always been off limits to us as kids. I knew the drill because I had heard it before. I would hear the truck back in, followed by men’s voices speaking in hushed tones made sharp by the frozen, arctic air. My dad’s keys would jangle as they ferreted out the lock in the dark and then he would come in through the backdoor and find me up past my bedtime, watching late night talk shows.

I promised. I never looked, but I always listened. An argument, a struggle, a crack, a thump. The long drag. Sometimes, the voices of men I didn’t recognize met the frozen timbres coming from the cold, chapped lips of my dad and his brother. And this time, a dripping crimson trail to the back garage.

I had heard the rumors about my family from kids in the neighbourhood, but we never talked about these things at home. My dad would be out late some nights, gone some weekends, and when he returned, my mom would try her best to remove the rust-colored stains out of his jeans when she thought I wasn’t looking. It felt like a ritual or a tradition and I imagined generations of women before her doing this same loyal scrubbing, watching the enamel of the sink turn brown with old blood as the radio played its fuzzy tunes. She always turned it off right when the news came on, said it was because she couldn’t stand the grating voices of the announcers.

People around town always recognized my dad’s truck. My friends down the street would tell me they saw it – the tell-tale arm hanging out of the driver’s side window, a lit cigar propped between two of the fingers. They knew better than to say where they saw the truck, outside of which warehouse, in what field. They never uttered who got in or out of it, but they always told me that they saw it. It was like a strange celebrity sighting. But it was the frozen bloodstain – spotted that day when we were outside having a snowball fight – that pushed the neighbourhood kids to break the oath of polite silence they had sworn to their parents.

Tommy saw it first. He was running to take cover behind a tree when his Sorel caught a patch of black ice on the path and he face-planted into the snow. His forehead crumpled in confusion as he pulled off his mitt to check his nose for the source of the scarlet drip. When his hand came away clean, his gaze returned to the ice. I watched with horror as he followed the trail of red to the back garage. At the door of it, he stopped and looked back at us. By this time, we had all noticed what he was following. We stood like statues, unable to move, as our hot breath lifted in steam clouds above our heads. I could feel the tears begin to well up in my eyes, freezing against my eyelashes. I knew there was nothing I could do to stop Tommy from opening that door, but worse, I realized there was nothing I could say now that would protect my father’s image.

I managed to croak out the only thing that I could hear in my head amidst the sound of my pounding heart.

It came out barely louder than a whisper and I’m not sure Tommy even heard me. It didn’t matter – he had already kicked the door open and stumbled in. I ran between the statue kids, still out of breath as I stepped inside. A huge deer hung upside down from the roof. Tommy and I stared into the dull eyes of the frozen, dead animal. Finally, I repeated the phrase I had heard my dad and uncle ask other men.

“Does your family want to buy any sausages?” 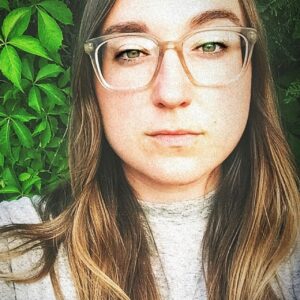 Miranda Dahlin is an anthropologist and emerging fiction writer from Manitoba, Canada. You can find more of her short stories in Macabre Ladies Present: Dark Carnival and Handmade Horror Stories. When she’s not writing or studying Latin American asylum cases in the US-Mexico borderlands, she’s listening to more 90s alt-rock than anyone would consider cool, and reading horror novels to her grouchy cat Nacho.