I wasn’t speeding but as I pull over, so does the undercover squad car behind me.

Last time a cop’s lights appeared in my rearview, I was drinking. I’d gone to visit my father’s grave and snow began to fall. My pint was under the driver’s seat. As I reached down to get it, the steering wheel jumped like an electric eel. My right tire hit the curb, sent my jalopy spinning. I hit a parked Buick on the opposite side of the street. The windows shattered on impact. Cool air rushed in. Something under the hood hissed. I remember finding the pint. I remember the screaming in my head couldn’t be drowned. Soon those familiar lights appeared.

Running seemed like the right thing to do. I hopped a fence, fell, crawled through a darkened backyard like an infantry soldier. At the back of the yard, I hurled into a dog dish. The cops found me later, my head stuck inside the dog house. The judge didn’t have any sympathy. Community service.  Driver’s license revoked. Probation. None of it brought me closer to my dead father.

The plainclothes cop now tapping at my window startles me from this reverie. My car window rolls down with the sluggish weight of a failing motor.

It’s the undercover cop who’d come by the Detox Center after Donnie died. In the rearview, I see his partner standing behind the passenger door, right arm hitched. They both look tired, bored.

“No, I’m Franzen.” The man yanks his head back. “That’s Barnes. Hey, what happened to your face?” The fumes of catalytic converters waft by as oncoming traffic slows to gawk.

I touch my forehead. The injuries are still raw, as if my face had been seared on a hot buttered griddle. “Fell off the ladder.”

“Hit the floor face first. Put me out cold.”

A cop’s scrutiny is always the same and never fun. Jumping procedure, I hand Franzen my license. “I didn’t think I was speeding, detective.”

Franzen waves away the license. “It’s nothing like that.” I think of the term ‘shit-eating grin.’ But why would you grin if you were eating shit? “We need you to come down to the station. Fill out a formal statement about Donnie Bencik.”

I tuck my license back into its plastic sheathing. “What about Donnie?”

Franzen nears with an uncomfortable crouch. “We found the body of a security guard floating in the Rouge near Zug Island yesterday.” This all seems obvious to Franzen, like I’m a child and it pains him to explain again the math problem I still don’t understand. “Donnie and this security guard were mixed up in a robbery before Donnie overdosed.”

Franzen exhales. “You were the last person to see Donnie alive, right?”

“And he stayed at your rehab facility three months, right?”

“We need you to make that into a formal statement. Timelines. Details on Donnie’s state of mind, his life.” Franzen rises, drifts toward his vehicle. “Follow me.”

The strike of paranoia is like a sharp stick to my intestinal tract. How did they know where I was? Do they know about Viktor & Mickey? The money in the trunk?

In one sprawling moment I see it unraveling in the interrogation room. If I go to the station, I won’t be able to get the money to Victor & Mickey and save Charlie. I imagine my friend’s hefty body beaten to a lifeless lump.

Both detectives ease gingerly into the squad car. I can almost smell the over-fried scent of fast food escaping their seats. I catch a glimpse of Barnes as they pass, the gaunt expression of a man nostalgic for car chases, erections without pills.

I pull into traffic, lagging behind by two car lengths. A mile down the road, they loop into a Michigan left to head north. I pass the turn-around, the detectives’ car. I change lanes, speed up into traffic, blend in. At the next intersection, I run the red. I do this with no ill intention. I do this because I have to. 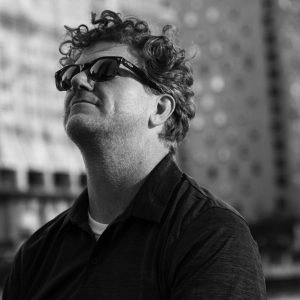 Scott Miles is from Downriver Detroit and lives in Chicago. Twice nominated for a Pushcart Prize, he’s had his short stories published in magazines such as LIT, Cimarron Review, Beloit Fiction Journal, and most recently in Suspense Magazine and the UK short fiction anthology Noirville: Tales from the Darkside (Fahrenheit Press). He is the author of the short story collection The Downriver Horseshoe.