I shiver at the doctor’s scrawl, at the sterile clinical edges of the medical terminology that tears into the brain like barbed fishhooks sunk to their eyes.  The diagnosis is terminal; my old man’s another zombie in a B grade horror movie stumbling his way toward a gaping pit at the local bone-yard.

A wave of memory crashes down as I touch the hard polished steel of his gun, smell the reek of spent powder and feel the film of oil on the barrel coat my fingertips.

The lessons began with laughter resonating through air and tickling my ears as I stood clutching  dad’s thirty-aught-six, struggling to hold it up right and look down the barrel with my thin daddy-long-leg limbs quivering with effort.

Bemused, he handed me a tattered broom and a rusty ax and taught me that if I couldn’t sweep a floor or chop oak into firewood then I couldn’t hold a gun.  And, if the beer glasses didn’t shine, then I couldn’t keep a gun clean from rust and unclogged with soil.

Autumn, pine-cones under our boots like teeth and it’s my first deer hunt.  He taught me how to breathe, how to take air deep into my lungs and hold it smoldering so I became an extension of the gun aiming carefully, releasing the air out slowly with the butt pressed firm against the right shoulder, aware of my heartbeat surging and the wind against my cheeks as the last warmth of the sun dipped through the conifers.  I took one last look down the barrel, then squeezed the trigger gentle as an old lover.  I shuddered as the adrenaline of the first shot surged and the sound of the exploding powder engulfed me.

But pulling the trigger, he said, is only the beginning.

Hit but not killed outright, we track the wounded buck through the mud and the dirty snow until we find it collapsed in the willows, wheezing the last of its life into the dusk.  I try to raise the gun and finish it but courage fails me and I look away at the last moment.

My father grabs the gun away and shows me the mercy of death.

We gut the deer, remove the organs; it’s body heat warming our hands.

Home, we slice and fry the heart.  As I chew, I see beyond the end of things.

Zeroing in on the target is the easy part.  Spotting the torn patch of fur caught on the thorn bush or the trickle of crimson against the gray clay on the river bank thirty feet away or old lady peeking through moth-eaten drapes on the third floor of the brick building across the street with her cancerous cat in the crook of her left arm is the hard part.   Collecting those details without effort keeps the hounds off your trail.

I snap into the present.

He refuses radiation or the bite of the surgeon’s scalpel, checks out.  I don’t blame him; a clean cage is still a cage.  I follow him home.

A hundred yards away down the barrel my old man’s bent over in his merino wool sweater, a smoke dangling from his cracked lips.

I take one bullet and load the gun.

He smiles, strikes a match with a shaky hand.  He walks down to where the willows begin.

I take aim and realize I have become my father; that the image staring back is a portrait in a dark hallway taken down and brought out and exposed under the harsh rays of a noonday sun.

He flicks the smoke and snuffs it out with heel of his boot and nods his head.

I squeeze the trigger.

My father spoke to me in a language of guns.

Thunder and fire pour out the gun’s mouth like dragon’s breath.

The old man falls backward and down the hill out sight.

He’s breathing when I reach him.

This time I don’t hesitate.

The echoing gunshot ripples and then fades like a wave breaking against a rocky shore.

A crimson blossom blooms and swaddles him in a shroud of misshapen petals.

Even the terrible things are beautiful. 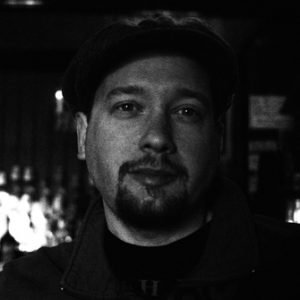 Jeffrey Kuczmarski's little black heart beats in Chicago where he carves wood with steel.  Jeffrey's visual stuff has been displayed at the DIY Trunk Show and is available on Etsy under Perpetual Relief.  Jeffrey's stories have appeared in Danger City, Danger City 2, Hardcore Hardboiled and Out of the Gutter.  And there's the tongue in cheek novel, Unnatural Trouble, on Amazon.  Jeffrey thanks everyone at OOTG, Shotgun Honey and Thuglit for the wood chipper, the ice pick and the unmarked bills.