I remember my father’s body as I smash Anna’s nose. Remember how clammy his embalmed hand felt in mine as blood spills down her face and onto the frozen concrete. Remember how I felt trying to give his eulogy but not able to get a god damn word out as she lays beneath me, begging me to stop.

I wonder if he’s above, watching. Daddy’s little girl. But it’s just Aaron and Jeff, screaming my name, grabbing at my coat.

Like I’m doing this for fun. Like she wasn’t practically begging for it, bragging she knew where the cop lived but refusing to tell.

They pull me off her. I adjust my coat. Squeeze my eyes shut. I want to keep kicking, but don’t. Dad always said never hurt someone more than you need to make your point. It’s a lesson I wish the cop who killed him had been taught.

“Tell me,” I say, sure she knows I’m serious now. “Or I’m gonna break your fucking leg.”

She talks through bloody lips. His name. His address. How her brother went to school with him.

I help her up. Tell her no hard feelings. And to keep her mouth shut.

Lincoln, where the State Cop lives, is an hour away. Jeff drives me.

“You sure this is right, Miranda? He thought he was carrying. That he had a gun.”

“That’s what he thought.”

“So it’s just been a few days. Funeral was yesterday. And after what happened when you went up there? Maybe give it some more time?”

Dad was no angel. I know that. There’s a certain kind of man that teaches his motherless daughter how to hurt people when she’s eleven years old, and those certain kinds of men are going to leave their share of pain and pity in their wake. They’re going to have records. Outstanding bills. They’re going to end up in a borrowed truck with six pounds of Ozark Brown stuffed under the seats, moving it north for their old friend Mr. Rash on some last desperate job to make chemo money, and some fresh-gilled patrolman is going to stop him, piss his pants when he thinks he sees a flash of chrome, then put three bullets in their chest.

There’s a path for those certain kind of men.

And one for their daughters.

I pull my gun out. Bought two days ago from Aaron’s uncle.

“Jesus, you’re really gonna do it.”

“How are you getting back?”

We sling weed to poultry plant workers and kids at the Christian college in Fremont. Like that’s a life worth figuring out how to get back to. There’s no one else now. Just me, Jeff, Anna and Doug, and after today, Anna would probably skip my funeral. “Just let me the fuck out, Jeff.”

I walk around the block twice once he’s gone, my finger on the gun, sweating in spite of the cold. Dad would backhand me if he could see. If he knew what I was thinking. I saw him smash a man’s face with a pool ball a few years back, right after I dropped out of college, but he drew the line at guns.

I approach the house. There’s no plan in my head. No branching scenarios differentiating bad from worse. Just me and the gun and the cop and the doorbell.

I buzz it. Hear movement inside.

My finger slips over the trigger. The gun comes half out of my coat pocket.

Mr. Rash opens the door, eyes bugging in surprise as he sees me.

Inside, I see the cop sitting at a glass kitchen table, couple one pound bricks of heroin sitting on it, clear in the open. The heroin my dad was moving.

The cop and Mr. Rash, they go for their guns the same time I pull mine, tears blurring my vision, my father’s name on my lips, my eulogy for him finally delivered in my squeezing hands. 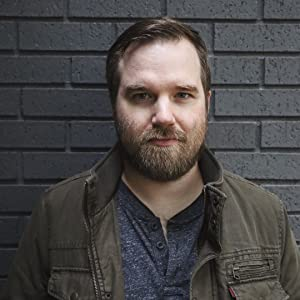 Paul J. Garth is a Best American Mystery and Suspense distinguished story author who has been published in Thuglit, Tough, Needle: A Magazine of Noir, Plots with Guns, Crime Factory, Rock and a Hard Place, and several others magazines. He lives and writes in Nebraska with his family, where he eats too many tacos, listens to too much heavy metal, and enjoys just the right amount of bourbon. An editor at Rock and a Hard Place and Shotgun Honey, he is at work on his first novel, and can be found online by following @pauljgarth