Enzo Gets a Bird

When my daughter busted through the door crying, dragging my mush of a grandson by the wrist, my first thought was, “I work too hard for this shit.”  Except I don’t.  I’m retired ten years in October.

Don’t get me wrong, I worked.  I worked for forty-five years.  When I was growing up, that was life.  You were a kid for sixteen years, then you worked for forty-five years, then you played checkers and farted for a month, and then you died.  Now people live to a hundred.  Who’s gonna pay for a generation of people that go to school until they’re thirty, retire at sixty five and live to a hundred?

I don’t feel guilty hanging around.  I’m still needed.  Hence the impromptu visit.  I was a mechanic; cars, buses, trucks, lawnmowers.  If it had an engine, I could fix it.  That lends a person an air of reliability.  Which could be a blessing and, on days like today when I just want to watch the Mets with my hand down my pants, a curse.

Vicki said “Tell grandpa what happened.”  I was at the fridge, getting the kid a bottle of vanilla soda (his favorite, if that didn’t say it all).  I had to duck to get into this shitty kitchen.  The arch wasn’t that low, I was just a big guy.

Vicki took the soda from me, twisted the cap, handed it to Enzo.  His eyes were on the floor.  He looked browbeaten, tired.  He said, “Pellegrino stole forty dollars from me.”

Pellegrino was the local party magician.  His big trick involved a bird that would squawk whatever number you were thinking of.  It was toucan, a parakeet, I don’t know.  I’m not a bird guy.  He also gave lessons, which Enzo signed up for after he saw David Blake or whoever pull a roll of nickels out of someone’s ass on TV.  Now he wants to be a wizard for a living.  He’s fourteen years old.  When I was fourteen, I tried to forge paperwork and fight in Vietnam.

I won’t judge the kid.  I will say: Enzo’s father, my son-in-law, who I don’t care to mention by name, had hands so soft you would think he washed them in milk.

Vicki said, “He took your grandson’s money, said it was for ‘materials.’ Then he sent him home without a lesson!  I call to complain, and the number’s not in service.  He fleeced us, Dad!”

I knew where this was going.  Back at the garage, I had made a few friends.  Neighborhood guys.  Sometimes they’d throw me a little side work, I’d pull in a few extra shekels a month.  Buy a cigar, take the wife for a piece of fish.  It wasn’t the worst arrangement.  Like I said, I was a big guy.  You have to find work that suits you in life.

Enzo sucked down the rest of his soda.  At least he was skinny.  He got that much from his father.  Let’s hope he didn’t grow up to wear sneakers with no socks.  I went to the fridge to get him another.  “Come on, Vick,” I said.  “You think this guy skipped town with forty dollars?”

Vicki said, “What if he did this to twenty kids?  Or a hundred?”

Enzo took the bottle from me before Vicki could get it.  Snatched it, almost.  He popped the cap, said “Thank you, Grandpa,” and took a big pull.  His eyes met mine on their way back to the floor.  They were big eyes, brown with flecks of black shale.  Like his mother’s.  Like mine, in fact.  Had I ever noticed?

“Enzo, go get grandpa’s orange notebook.  It’s got my phone numbers in it.”  Blood is still pretty thick I guess.  Certainly thicker than vanilla soda, or the vodka pineapples that you-know-who loved so much.  Besides, are you ever really too old to get a few buddies together and drop an air conditioner on a magician’s head?

I just hope those numbers hadn’t faded too much.  We mostly used pencils, back at the shop. 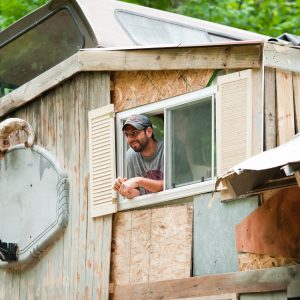 Chris Galletta is the screenwriter of the film "The Kings of Summer" and recently finished writing an animated film for Laika Entertainment ("Coraline," "Kubo and the Two Strings").   He was a monologue writer for "The Late Show with David Letterman," and his work has also been featured on websites like Vice and Vanity Fair.  He is based in New York.