The first time I set foot in this penitentiary I was overwhelmed by the ghastly smell and the noise. Piss, sweat, and the constant din of shouting are difficult things to come to terms with, but worse is knowing that the system is a complete and utter failure. After more than twenty years in this place, I’ve witnessed few success stories. No one would’ve included me among those fortunate few who left and never returned, the rehabilitated and the free at last, but I finally have an escape plan.

Like almost everyone else trapped behind these walls and bars, I never dreamed I’d be here this long. Like so many other pathetic cases inside, one mistake led to another, one bad life choice seemed to heap three more on top of it, like a pile-up car accident. Before you know it, you’re doing twenty to life. I watched too many people die before they could move on. Years ago, I thought I could walk away and have some completely different life. Happy was something I was never able to imagine, but I thought I had it in me to conjure up a different world, a place without locks, barbed wire, and the constant threat of brutality.

What crime sentenced me to this purgatory? I’m guilty of the sin of my birth. I was born in this godforsaken town. Most prisons are in places where manufacturing fled in the middle of the night decades ago, leaving few jobs above minimum wage. Being a prison guard is the modern equivalent of working in the mines. If you’re from some forgotten backwater in Appalachia, you go down in a hole in the ground. Here, you go behind bars. No light enters either place.

It pays well, especially in these rust-belt archipelagos where prices were frozen when the unions died off a generation ago. The problem is the soul-crushing nature of watching over the human detritus entombed in our criminal justice system.

I ended up here after flunking out my first semester at the state university. I thought of joining the military, but my girlfriend was pregnant and wanted me around. Didn’t know what I wanted back then, but it wasn’t the “daddy prison hack” version of a life, but with nothing better on the horizon, I signed up and began on the night shift. On my first training shift, the smell and noise almost sent me packing.

Just a temporary gig, right? I’d move on, find a better job, but life got in the way: three kids, orthodontics, private Catholic schools, a mortgage, and car payments held me in this place like a sentence without the possibility of parole. Now I’m coming up on enough time to retire at half pay, but if I stay another seven years, I can get seventy-five percent. And like a convict who just can’t go straight, I was ready to stay on, collect a full three quarters pension for the rest of my life. It’s only seven more years, I told myself. Easy time.

Seven more years dealing with the total wretchedness of this place, the hellish racket of constant screaming, yelling, threats, profanity, the petty arguments of uneducated guards and convicts, the claustrophobia of locked doors and gates crashing shut, the insane alarms pounding in your ears, and the devastating violence as ever-present as the foul air. Seven more years, then I can move on, learn to paint, or play the piano. Of course, I could’ve done those things years ago, but I never knew how or where to start. I was scared to death of leaving this place, for something, anything new. Finally, I’m more horrified of staying than forging into the unknown.

I can thank my youngest son for my change of heart, my sudden act of courage, my decision to retire in three months and never look back. Hank’s a great kid, but not much of a student like his older siblings, both doing well at college. Hank’s a junior in high school, graduates next year. One question from Hank and I decided we needed to pack up and leave this town immediately. 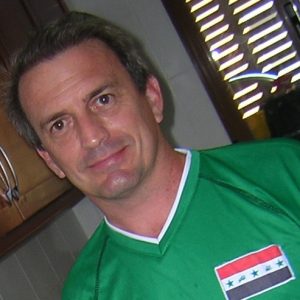 John Scheck has lived in four countries on three continents. In no particular order, these include eight years in Lower Queen Anne in Seattle; the Miraflores district of Lima, Peru, during a university exchange program; the Glyfada area of greater Athens, Greece, as part of his short and distinguished service in the U.S. Air Force; and now the Ruzafa neighborhood in sunny Valencia, Spain, is home.