Somebody threw a bucket of water on Daffy, putting the fire out.

Mickey leaned against a work bench and hustled a cigarette from a soft pack of Marlboros. Minnie lit it for him, then cooed, passing a hand over his crotch.

“He say anything yet?” Mickey said.

“You give up being a cold-hearted son of a bitch for Lent, Goof?” he replied.

“He ain’t talking,” I answered with a shrug. Always the deferential one.

“He’ll talk,” Donald said. “These fucks from Warner Brothers think they’re tough. But they ain’t tough.” His voice began to fail him, replaced by a hoarse whistle. He produced an inhaler and took a hit. Then he pulled out his dick and started pissing on Daffy.

Minnie favored the member with a covetous smile. Mickey rolled his eyes. Chip and Dale howled with laughter. Daffy struggled but the restraints were tight. I would know. I tied them myself. He wasn’t going anywhere.

I just shook my head.

This was all wrong.

We were three stories under the park, in a maintenance room west of the castle. It looked like an ACE Hardware had thrown up in there. Screw drivers and batteries and copper coil wires and nails by the dozen. Some broken glass. Bloody gauze. Teeth. The bric-a-brac of a capture and question. There was enough of Daffy’s bodily fluids beneath the chair to fill a bath tub. I heard the rumble of the Monorail overhead.

“You like that?” Donald said, stuffing himself back in his shorts. He adjusted his hat, straightened his bow tie and then spit in Daffy’s face. Daffy winced. An eye had swollen shut. He was having trouble keeping his head up.

“I’ll tell you what we’re gonna do,” Donald said. “We’re gonna find that no-account son of his—Danger—and I’m gonna carve him to pieces with a Miter saw…right in front of his old man.”

Mickey cocked an eye at him.

“His tongue’s the size of a filet mignon,” Chip said.

“What’s that comin’ out his ears? Looks like maple syrup,” Dale added.

“He ain’t talking,” I reminded everyone. But nobody heard me. No one ever did.

There was a knock at the door. Minnie answered.

It was the dog.

He didn’t look well. Like he hadn’t slept in a few days. His fur was mangy. An open sore behind his ear looked infected. We all knew he’d been on a bender. Dust. Meth. Easy to score over in Epcot. He leered at us, flashing a mouth full of rotten teeth. Then he gestured at our captive.

“He ain’t singing like we thought he would, boss,” Mickey said.

He took a step toward Daffy. We all grew silent. Pluto scared the hell out of all of us. He ran the park and nobody ever dared cross him.

“Want me to do him, boss?” Donald offered. He was always too fucking eager. Had bodies buried all over Frontierland.

Pluto looked from one duck to the other. Then with a paw he lifted Daffy’s chin, as if appraising him. In all my time with that crew I’d never heard him speak. Nobody had.

The sound of his voice chilled me bone deep. Nothing in my memory was as awful. Not the infant floating face down in Typhoon Lagoon. Or the scream from a severed head on Space Mountain. Or syphilitic Cinderella moaning in her padded room.

“Feed him to the escalator,” he said. 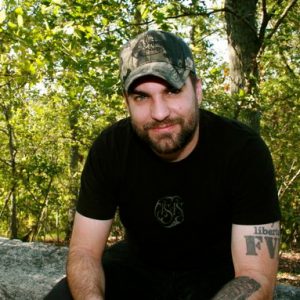 Peter Farris is a graduate of Yale University. His debut novel will be published by Tom Doherty Associates/Forge Books next winter. “Disney Noir” was his first attempt at flash fiction. He keeps a presence on the web at The Sentence Salvo.