I sit on the veranda having breakfast.  Nothing fancy, two fried eggs, one with a broken yoke, a rasher of bacon, toast, a grilled tomato with fresh leafy greens on the side.  Always have something green on your plate.  Make it a habit.  It’s good for you.

A raven lands on the veranda rail.  Watches me. A handsome bird, large, glossy black, cruel brutal beak, all business. He holds me with his eyes, pale almost iridescent blue, aquamarine, sparkly like a portal to another universe as if his eyes were fixed in his head  by some metaphysical jeweller or wizard.  It leaps to the back of a chair adjacent to me.  Quiet. Regal. He watches, sizing me up.  Doesn’t demand food.

I’m more into science and physical things but he brings out the pagan in me, the superstitious, the pantheist. I can imagine him escorting the dead to the netherworld, or slipping a bit of info to Odin, the Allfather.   I feel flattered that he visits,  as if I’m gifted with something special. Maybe he’s just returned from delivering Sid to the other side and is letting me know.

Watch out for the neighbours, I tell the blue eyed raven.  They’ll shoot your arse.

The neighbours are like that. Shooting things.  The dumb bastards shoot dingos and hang ‘em on their barbed wire fences like trophies.  It pisses me off no end.

I’ve given them an earful about it.  Told them if they ever crossed over onto my land with their guns, I’d shove ‘em up their arses and pull the trigger till they ran out of bullets.  Most of them believed me but Sid threatened to bait my property and burn me out.  He’s a nasty  bastard. I believed him.

I hate animal baiting.  It’s a rotten control method and a hard death.  Folks here have problems with feral cats and foxes. I keep telling them to leave the bloody dingos alone and they’ll take care of it.  If they’re worried about their stock, get a damned donkey.  Donkeys hate dingos, dingos know it and give ‘em a wide berth.

It was a full moon. My dog whined. I figured Sid was out and about.  I could see his electric torch bobbing along the paddock as he approached my shed.  I’m good in the dark. I grabbed my knife and slipped out the back door. I worked close to the ground, running stooped, remaining in moon shadow. Sid’s silhouette stood out like dog’s balls in the moonlight.  He was carrying a fuel can. Dingos howled in the distance. It put  Sid on edge. Sure of my footing, I raced ahead, hit the dirt and waited for him to pass. The blade was that sharp I don’t think he felt much of anything when I hamstrung him.  I rolled away into moon shadow and scrub before his leg gave out and he hit the dirt.  He didn’t know what hit him.

I left him to crawl back to the fence and  his Land Cruiser.  I didn’t want to kill him, just teach him a lesson. The dingos weren’t so forgiving. The night belongs to them and it was their moon, armed with an excellent sense of smell, hearing and night vision. It didn’t take them long to smell blood and find him.  For a species that will cannibalise  their own I guess eating an injured human was no hard task. He must have screamed but I didn’t hear,   I’d gone home and went to bed.

They found him the following day strung across the barbed wire fence that separated our properties.  The dingos had made a dogs breakfast of him.  His body was shredded. I felt bad but I wasn’t about to go to the law and tell them I’d hamstrung him.  They came around and saw me a few days later and said the local National Party member had arranged to get government funding to have the properties baited because of the dingos.  I told them I wasn’t interested.

I had no feud with them dingos. 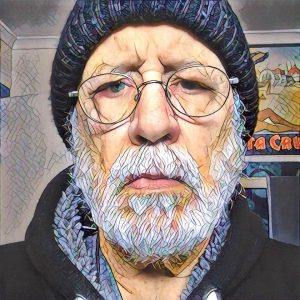 Alpheus Williams lives and writes in a small coastal village in Australia with his wonderful wife and their border collie.  His work has appeared in The Molotov Cocktail Winners Anthology, Barren Magazine, Storgy, The Write Launch, The Fabulist Magazine, Phantom Drift, et al.