Panky is strutting around the track like a peacock!

Outside of a few white hairs, a thirty-year bid ain’t changed him a bit.  Just like old times watching him hold court, even if nobody listening.  Game just ain’t what it was in our prime.  Macks ain’t got no ambition!  Looking raggedy.  Carrying on with bitches who ain’t clean.  Out here Chevroletin’ it – shoving one foot and laying the other like its hip.

My man Panky, he always had class.

Finest cars on the avenue.  Baddest bitches in the stable.  Plenty of high fashion on the scene.  The name carried weight in the street.  Then he caught that case.  Trifling bitches jumped ship soon as word came down Panky wasn’t getting out of it.  A good hoe knows to go automatic when her man gets pinched.  Serves them right the macks they chose busted their asses to the gums.  Some caught cases.  Some went to the grave.  Some found Jesus.

Not me.  I waded in the water holding out for my man.

It was tough times being an outlaw but I was glad to take the lumps.  Ain’t no other mack walked this earth holding a candle to Panky!  As long as breath is in this body he won’t ever have to look over his shoulder.  I feel bad I only laid a hundred thou in his hand when he walked through them gates.  Should have been more.  We young still.  Got plenty time to play catch up.  Might be snow on top but a good hoe keeps a fire burning in the chimney.

A good stroke these days ain’t all we need to get back on top.  Panky seeing that first hand pulling prospects.  Young bitches ain’t got no respect when a mack pulls their coat.  Their man let them talk out the side of their neck and treat him like they ain’t shit.  Might even fight him!  Most times it’s hard telling who’s the pimp and who’s the hoe on the track.  Nobody taking care of business because they not staying true to the game!

Hoes ain’t getting grips up front.  Macks looking for love and wives.  Disgraceful!  What makes it so bad is the tricks.  Cheap bastards don’t want to pay no more, like they supposed to get a five-finger discount on checkout.  The nerve!  Internet got folks feeling entitled for free service.  Oh, and them ladyboys.  Worst type of hoe to walk the track.  Tricking ain’t ever gave nobody a pussy.  Proudly undercutting the standard rate ain’t ever set hoes on easy street either.

That young thoroughbred Panky talking to over in the corner just might be a good hoe.  Might need a little seasoning to iron out them cornbread edges first though.  Them types turn tricks way too long thinking they doing the most.  Ain’t even walking away with a wet trap.  One slap and they acting like they bleeding to death.  A good hoe knows how to give pleasure and take a lot of pain.  Might take some time, but Panky break her in right, she’d be a good earner.

I’d call it quits after that philly, but my man got to see for himself what’s what out here.  It’s rare finding bitches on the track barely doing the one thing they supposed to be good at.  That load from these tricks ain’t gonna bust itself, or didn’t they know that?  The goal is to make tricks come by any hole, not lay up and play sex doll all night.  These ladies of leisure making it hard for honest hoes like me to get an honest day’s pay for an honest day’s work.

Bought time I start hitting the track.  Panky will be needing some more ice around his hands and silk around his skin.  Can’t have my man out here in cheap shit.  Whatever he wants this pussy can get for him.  These legs are a portable ATM.  Open twenty-four hours and taking deposits.

I’m a bottom bitch that knows how to bring my man his money. 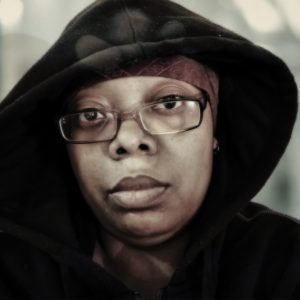 Tia Ja’nae is a creative writer and master propagandist.  A proud Trekkie, her writing engages, boldly going where few have gone before.  Her more serious, satirical journalist work has been featured on Humor Outcasts; check out her satire under her pseudonym on www.articulatemadness.com, which could be classified by order of your government.