Dean had been driving late into the afternoon when Billy finally woke up.

They had entered Algonquin Provincial Park a while back, a wide open space carved out of the Ontario wilderness bursting with lakes, rivers and wildlife.

Billy sat up straight and looked out the window. “Oh, good. Was I asleep long?”

They had left Ottawa a few hours back heading west to the Muskokas. The reds, oranges and yellows of the dying leaves blurred by in a brilliant blaze of amber.

The two often went hunting together throughout the season and although they normally stayed close to home, Dean wanted to shake things up and make a weekend out of it. They decided they would make the four hour trek west and rent a cabin for the night.

Billy switched on the radio, moving up and down the dial before settling on an old Metallica song. “We should have done this a long time ago. I needed a weekend away from the ol’ ball and chain.”

The morning arrived quickly. The pair spent the night in a rustic cabin just off the highway in one of the lesser known campgrounds. The site was mostly empty; a few pickups in the parking lot, but the front desk clerk said it was mainly staff. Seeing as hunting season technically ended in two days, there weren’t many people around.

Last night, they’d made sure to take in only what was necessary leaving the remainder locked up tight in the cab of the truck for efficiency’s sake in the morning. Dean had installed one of those aluminum sliding hard tops hoping it would hold up and prevent theft.

A short drive later, they pulled into a gravel parking lot near a trail opening, the two exited the truck and prepared to enter into the bush.

Dean pulled out his rifle from behind his seat and began putting it together.

Billy went around back and opened the trunk. It was empty.

Dean didn’t answer. He had his back to Billy, his head down.

Billy closed the trunk and walked up behind his friend. “Hey Dean-o, you deaf or what? I said where’s my stuff? I left it with you to pack.”

Dean was assembling his hunting rifle, sliding the scope into place, his head down. The soft clicks and soothing sounds of assembling weaponry never failed to put him at ease.

Dean turned his head to the left and spat on the ground. “It’s back at the house. You don’t need it, anyway.”

“What do you mean I don’t need it. What am I supposed to do this weekend? I didn’t come out to tag along with you like some bitch. I wanted to bag some game.”

Dean brought the rifle up to his shoulder and looked through the scope, testing out its range. “You don’t need it because you’re the game.”

Billy laughed. “Come on, man. Cut the shit.” He jerked his thumb back in the direction of the pick-up. “Is it under the seat or something?”

Dean lowered the gun and turned to face Billy, “I know you and Tammy were fucking behind my back. I know this, Billy, because she told me right before I put a bullet in her head two nights ago.”

The color drained from Billy’s face. “That ain’t funny, Dean. I don’t know what you’re talking about.”

“Shut the fuck up, Billy. Don’t lie to me. It was hard enough to pry it out of her, I don’t need this from you too.”

Billy started to back up.

Dean shook out a cigarette, plugged it between his lips and sparked it to life. He took a long drag before exhaling. “Because I’m a nice guy, I’m going to give you a thirty second head start.”

“You’re making a mistake. It didn’t mean anything. You weren’t supposed to know!”

Billy turned and ran into the bush pushing his way deep into the forest. 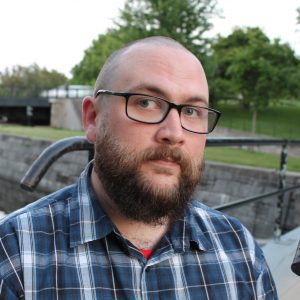 For the past seven years, Brandon Sears has been running a book blog entitled Every Read Thing.  Outside of that, he's an Insurance Advisor by day and a constant reader by night.  He lives in Ottawa, Ontario with his partner Alaina and their cat, Agatha Kitty.