I never really liked this collection job. Most of the people I collect from I know from the neighborhood. It’s South Philly. I grew up with their families. Mostly what I get is chump change to Bocco. But they’re life changing savings to the families. I go easy when I can. I even shell out of my own pocket once in a while, just so some poor jamoke doesn’t lose the use of his hand, so he can keep working. But today was more fucked up than usual.

I made my regular pick up at Fanelle’s garage. They never miss a payment. On my way down Passyunk Ave. I saw the Venutti girl, Fiona. It looked to me like she was hustling. Short leather skirt, tight red sweater, high heels, middle of the day … I’ve known her Pop for ages. I swung over to the curb, slid my passenger side window down and called out to her, “Hey, Fiona, what the hell are you doing out here?”

“What are you talking about …”

That’s when I saw a tattooed hand reach in and unlock the door. I grabbed the wrist but the door opened.

With his free hand he shoved her away, yelling for her to shut up.

It got tough, leaning over, holding on to him. I’m thinking ‘what do I do now… shit, drive.’ So, I pulled away just quick enough to make this asshole jog, then I sped up until he lost his footing, then drove a little further. My hand was aching. My forearm burning, so I let go. I pulled the car over quick, hopped out with the billy club I keep by my seat and raced around the back of the car. He was just starting to get up so I kicked him hard in the gut. I had the club raised when I heard Fiona’s heels clacking up behind me.

He moved to get up. I stomped him on the ass, “Stay down asshole! What’s going on, Fiona? This is a situation now, you know.”

“He’s my friend. We need a few bucks. He said this would work.”

“This ain’t no way. And in our neighborhood for christ’s sake. Plus, he put his hands on you! What do you think your father would do? Your brothers? Holy shit!”

“Not that easy. You know …” he moved again, “I said stay down, fucking idiot …” this time I whipped the billy club across the back of his thigh. He howled. “Shut up dipshit. Fiona, you know who I work for, right?”

“Don’t matter. I can’t let this stand.” I hoisted Donny up. Shoved him against the car, “We’ll never see each other after today, you understand?”

I threw a right hook, caught him in the temple. The kid was on the ground again, out cold. “Fiona, you’re going to call this in as a hit and run, got it?”

I arranged the kid so his legs were under the car, in front of the rear tires.

“He’s a loser, Fiona, you can do better.” I turned from her, got back in the driver’s seat, started the car. The kid started to wail “Noooo, please!”

I hit the gas, the car lurched. I heard him shrieking as I pulled away.

‘Should have stayed in Fishtown, asshole. You made me late for my next pick up.’ 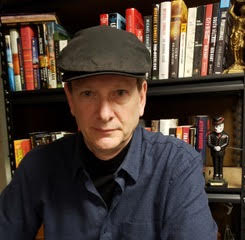 Steve Zippilli was a corporate grunt for longer than he’d like to admit, but suffice to say he quit after being considered used-up, a malcontent, and too expensive to maintain. Now he's working on this writeringship thing. Along with his writing partner, Stuart Smith, their short story, She Died with Grace, appeared in ThugLit Magazine and they have self-published a mystery/thriller, Kings of the Street, available on Amazon. The sequel is close to completion.