Damned as He Was

The old preacher frightened me.  His legs stomped the plywood stage at the front of Granny’s church like medieval battle rams, pure force of will bolstered by ages of men just like him, born up from pine woods and the open valleys shadowed by the Smoky Mountains where they found God and signs of God in every shift of the wind or temperamental twist of their own ragged lungs. His name was Brother Odell, and when his voice rose, primeval and ragged through the open windows of Granny’s little church and out into the dusty North Georgia morning, my bones knew the fear of God, and when I looked at Granny sitting beside me, placid and serene, I wasn’t fooled because I saw it in her too.  The fear.  Different and older, bound up in a reservoir of love that made the fear sharper-edged, like a knife inserted below her own kidney.  It held her up and also bled her out in equal measure. Granny would wash you in the pure blood, shed from her own deep misery, the same misery of the mountains I sensed when I woke suddenly at night, listening to the nightbirds shuffling and screaming outside in the old hackberry tree.  That sound, so different than home.

But this was home now.  And today, after the singing and the preaching, I’d go up to the altar.  I’d seen others before me.  They walked up proud, heads high, but none would meet Odell’s old and knowing eyes.  He was pure hawk, a vessel of cold blood that would not be tainted by the pull of fleshly sins.  Granny held my hand.  She squeezed it tightly, the moisture from her own a testament to this moment.  Somehow my walk to the front would allow her to shuffle on, straight and confident, to the grave, knowing she’d set me right, in a different direction than her own son, my father, damned as he was.

“His kingdom is steadfast and his punishment is blinding fire, a thousand swords to the eye if you do not make yourself right with him and deny the wickedness of this world,” Odell shouted when the music and singing ended.  All the church said ‘Amen.’  Except me.  My lips were dry ice, frozen shut, the saliva in my mouth disappeared.  I couldn’t breathe.

“I understand we have two young people who are ready to enter their eternal fold,” Odell said, his voice going quieter, but no less commanding.  “Today they meet their heavenly father.” His eyes slowly took in the tiny room, noting every detail.  His face did not flinch or offer any hint of humanness.  No, he’d washed that all clean with God’s law, the stones so heavy with time and fear that ten Moseses wouldn’t have been able to carry them up the mountain.  “A boy and a girl.”  He dropped his eyes on the girl, not much older than me sitting with her parents across the room.  She was pretty, if a little distant, her head already with God somehow, as if she were trying to shed the skin that made her human because we are so flawed after all.

“Come,” Odell said, and the girl rose like a puppet. She floated down the aisle as the organ began to grind, Sister Patricia’s eyes already shut tight in the ecstasy of what was coming.  Granny’s hand tightened on mine.  The blood was cut from my fingers, and I tried to move them to remember they were still a part of me and I was still me, no matter what they tied to my neck, I would still be me.

Odell started with a prayer, but it quickly changed to a shouting, a condemnation of the girl, of her humanness, of who she was deep inside her deranged heart.  She fell prostrate beneath his fury, as I’d seen others do.  She began to squirm and twist, and gyrate.  She shuddered long and hard, the back of her head knocking against the plywood stage like a hammer.

Silence fell after.  The old ladies fanned themselves with handkerchiefs and the men shifted nervously in their seats.  Sister Patricia continued to play.  I looked out the open window at the trees, thinking of Dad, the way the gun had seemed so large in his hand, the way Mama’s eyes had known what was coming, but she shut them anyway and spoke my name.  What came was an echoing silence that would not cease.  What came was this: the memory of the gun, his heavy, clenched fists, and one more thing.  He used to hug me after he beat me.  He’d hold me so close and tight and warm, and whisper how sorry he was, and I believed him.   I believed him so much, I hated myself for it.

The girl was crying as she returned to her seat, but the tears were tears of joy because her salvation was complete.  She’d been slayed in the spirit and now God had claimed her as His own.

Odell’s cold eyes turned to me, and Granny let go of my hand.  I hesitated, thinking of Dad’s arms, hoping one day God might hold me too, whispering over and over in my ear how sorry he was.  I stepped into the aisle and faced the old preacher.  I walked down the aisle, my body already beginning to bend and sway to the rise of Sister Patricia’s organ. 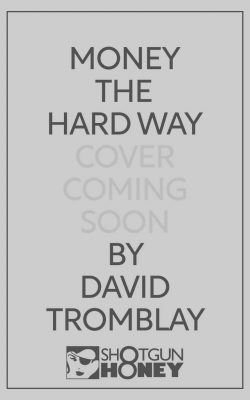