“What you doing, Detective?”

“Cain’t tell if you asking or telling.”

“You…you cain’t prove anything. I ain’t going to jail.”

I drove through an ugly part of town, the last bit of civilization before the desert took over. Light industrial pocked with auto body shops, oil industry supply houses, busted-neon strip clubs, head shops, drinking dives of all stripes. These streets had long since become the asphalt graveyard of the lost and rejected and those who sheltered in the hidden alleys and darkened doorways.

“Then where you taking me, dick?”

He breathed out anger. “That’s not my name. It’s just what the cops call me. Detectives who can’t find their own dicks.”

“Funny. Dicks who can’t find their dicks. But it wasn’t the dicks who named you.”

PD found him sitting on a bench. In a small park that was populated by squirrels and the lonely old. He’d been bloody. Dried, the red gone brown and crusted over.

“Six months’ of crust,” one of the black-and-whites had said.

“It was blood crust,” he said, picking at his hands.

PD held him for six months and he never said a word. Patrol and dicks came up empty beyond Crust’s bloody clothes. Typed, printed, DNA’d and nothing useful, of him or the victim, ever came back. The investigation went dead straight nowhere.

Crust had given a confession in search of a victim. Eventually he had walked free.

A year later Crust popped up again. More blood, another confession, again zero evidence. Nine months after that…another. Then another.

“Lots of bodies at your feet.”

“Texas desert is damned big.” Flophouses and massage parlors slipped past, tired women, exhausted men, both watching my unmarked but obvious squad. “Ever troll down here? For victims?”

The muscles on his jaw tightened down like screws under a thumbnail.

“No,” I said. “Because there are no random victims. They’re specific, aren’t they?”

When Crust and I entered the shitty motel room, Dennis’ eyes were buggy, like a terrified Boston Terrier. His sweat was a shedding second skin. He moaned, but the sound was shoved back down his throat by the ball gag. Before I’d gone looking for Crust, I’d tied Dennis with rope that I’d twisted between limbs and balls. Every time he moved, the entire thing tightened around his scrotum.

“What was his name?” Crust asked.

“They called him a suicide. Ate a bullet.” Crust eyed me. “From one of your guns?”

“PD never figured out where he got it.”

“I’m not magic, Crust, I can’t make anyone do anything they don’t already want to do.”

Crust nodded toward Dennis. “He the same as Jess?”

“No. Prefers boys. But young. About the same age.”

Crust wanted to hit me. I saw it in his clenched fists, heard it in his hissing breath. But mostly I tasted it in the poisoned air he breathed out at me.

Dennis’ room was mostly bare. Three or four crumpled soda cans, a mostly-smoked bag of weed. A half-empty container of lube. The detritus of Dennis’ life and his proclivities in this small, cramped room in a non-descript, by-the-hour motel.

“He don’t have any pictures,” Crust said.

“They took a ton of pictures.”

“Yeah.” Crust dropped the lube on the floor, crushed it until it was dead. “Why not take him to jail?”

“I could ask the same of you.”

Crust’s broken teeth threatened me like a spurned lover. “Ad-seg? Safe and isolated from the mainline cons?” He eyed Dennis. “A few years and back on the street? Too. Fucking. Slow.”

Dennis pissed himself and his saliva, drooling from around the ball gag, spattered the stained carpet. The tang of fresh urine saturated the air.

Dennis’ face, built on abject fear, wrapped in on itself until it was unrecognizable. Did the kids look like that? Did they have that totality of fear in their eyes? So was I doing this for those kids? Or for future victims? Or to put a salve on my own inadequacies? “An apology? That no one stopped the men who hurt you.”

Crust had killed at least four people. I knew of the deaths but not of the people. I had talked to him ten or twelve times – formal interviews, informal interviews, casual chats on the street when I’d followed him – and he’d answered every question with a clenched jaw.

Dennis shook his head. Violently. Like he had when I grabbed him this morning while he prowled in a skate park. He was a known offender, convicted twice of molestation, unconvicted countless times.

“He’s been in ad-seg,” I said. “Three meals a day, laundry twice a week, books…letters. Internet access, for fuck’s sake. He killed some of his victims, Crust. Killed them. But we couldn’t convict. It’s possible, you know…to kill and get away with it.”

I held Crust’s gaze tightly. “Dennis told me those little boys understood his love. That they loved him, too. He told me those boys loved how deeply he loved them.”

I glanced at my watch, “My lunch break is over, I have to get back on duty. There’s a car out back. Enough gas to get to the desert.” 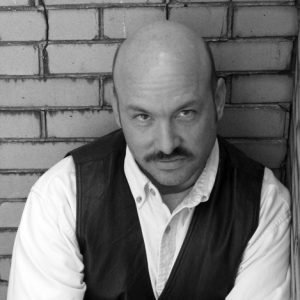 "Blah blah blah pizza job and blah blah reporter job and blah blah blah.  The good stuff is that Down And Out Books just snagged from Trey his entire ouvre of Barefield, Texas crime novels.  The first, 2005's 2,000 Miles To Open Road, has just been released (through all the normal outlets, but start at Down and Out's website) while the sequel, Exit Blood,' will hit your ereader in the second half of 2012.  Who knows how many there will be after that, but all will feature that stripped down, barebones, west Texas writing his fans have come to expect.  His other recent books are the non-fiction The Cancer Chronicles and the crime collectionRemembrance and Regrets.  His short fiction has been everywhere but this year has been mostly flash in venues such as Shotgun Honey, Flash Fiction Offensive, and Thrillers, Chillers 'n' Killers.  Find him at treyrbarker.com.