The Han Solo action figure didn’t approve of early morning drunk driving. He sat on the dash and half-smiled.

Larry tried not to let the patternless whip of trees and mailboxes crash him out. Fourteen beers ago, he’d promised himself not to park on the lawn again.

He was about to go into his Sunday morning litany about the evils of sobriety, when he spotted Jake the Shake. Pale. Shirtless. Dancing.

Larry reached about forty an hour before he noticed his leg had gone limp. Jake dashed into the street, humping the air like a spastic Chippendale’s dancer, T-shirt tied around his waist.

“We can give him the finger.”

Larry slowed, felt the tingle in his leg as his blood flowed, stopping an inch from Jake’s pelvis. Jake, sweating in the early morning sun, grinned like a refrigerator salesman.

Jake was in the seat like he’d already been there, the last tremors of bad techno bumping his hips. He sweat on the seat.

Jake untied the T-shirt and slipped it on. Peter Griffin, wrinkled and stained, locked eyes with Han Solo.

“Turn right up here, if you dare,” Jake said, scratching his arms.

“That where the party is?”

“Not yet. Real real soon, though. Almost now, but not now. Oh fuck, man. Turn around.”

“I can’t just turn around.”

“Why, you all fucked up?” Jake said, bouncing in the seat and waving his shoulders around. He murmured Flock of Seagulls through clenched teeth, making it sound punk. Then he reached into his pocket. There was a jangle, a click.

“Man, I really think you need to talk to someone. You need help.”

He said it sincerely, like on talk shows. Then he cackled.

“Fuck that shit, right? I’m up. You’re up. Let’s get way up, man. Turn left up here, then another left. Back the other way.”

“What you got in there?” Larry asked.

Jake reached for the figure. Larry’s hand found its way to Jake’s wrist.

Jake stared, the last remnants of his smile almost fading before he brought his cheeks up again. He backed his hand away.

“It’s cool. Most people put Jesus up there if they’ve been through shit. Everyone’s got their thing. I won’t judge.”

The butterfly knife was already in Jake’s hand, its blade wet with morning condensation. Jake locked the handle.

“Just got it,” Jake said, stabbing at the stop sign. “Turn one more time up here.”

“You’re going in circles,” Jake said, then sang the opening lines to “The Passenger” as he edged closer. “Your brother did, too. Big score. Bummer he bailed. How long did it take him to go through it all?”

Larry expected the knife to be at his throat, only the blade keeping his last breath from escaping. Jake just twirled it like a drumstick.

“Look, like Tommy Lee,” Jake said, giggling. “I couldn’t find shit for weeks. Lotta sleepless nights. You owe me, Larry. So I figure, you take me where I need to go, I get what I need to get…”

Jake began to raise the knife.

“And maybe I won’t cut you to pieces and bury you in my backyard. Sound even?”

Larry hopped the curb, aiming for the stop sign, hitting the tree instead. The car groaned, then sighed. The searing, then dull pain of the knife entering his right quad sent his head back in spasms. He clenched his eyes shut, felt the tears cool his cheeks, then fell out of the car, the back of his head striking the door as he landed flat on his ass, legs splayed across the floorboard and seat. The knife handle danced. The owners of the house were already calling the police.

Jake the Shake was long gone.

So was Han Solo. 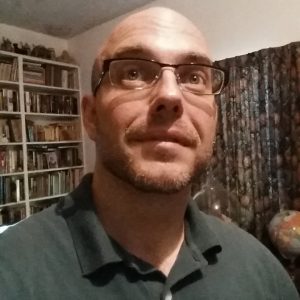 Greg Forrest is the author of the Speed Queen series, available on Kindle. When he's not writing crime stories, he's producing electronic music under the name Southbound Cinema. He also makes YouTube videos, such as the Bald Villain series of reviews and podcasts. His most infamous clip is "Glenn Danzig Grocery Shopping List," which went viral long before the term was popularized. Find him at http://southboundcinema.com, or @southboundcine on Twitter.