“Company’s here,” April Wilson called out. She gathered herself, tried to smooth out the half-moons her fingernails had dug into her palms.

Peter, her husband, opened the door to their tiny apartment and saw Bruce Howe standing outside with a six pack of Zima and a shit-eating grin. Bruce’s silver BMW was slashed across two spaces in the parking lot behind him.

“April told me you wanted one.” Bruce shoved the Zimas into Peter’s chest and stepped inside. He wore so much cologne that he smelled like he was trying to hide something.

Peter turned. April stood in the hall, their dark bedroom behind her.

April felt the intensity of Bruce’s stare, his eyes hard on her short skirt. “Goddamn,” Bruce said, ignoring Peter. “Let’s make it stink.” He grabbed April by the hand, whisked her into the bedroom.

He loathed his passivity.

Five minutes later, Peter was watching his boss fuck his wife in some position he kept shouting was called the “pile driver” – April’s shoulders pressed down on the bed, her legs floating in the air, Bruce crouched between them, slamming his hips down like a drunk trying to shut an unwieldy door.

Every thrust was a donkey kick in Peter’s guts, but he couldn’t say anything, couldn’t do anything. Couldn’t watch. He turned toward the nightstand and an ashtray of burnt cigarettes and a pile of late bills and the small bowl holding Maze, their pet betta fish. Maze swam to the side and stared at Peter.

Peter couldn’t look Maze in the face. He glanced up at the ceiling.

“Okay,” April said, “I can’t breathe.” Bruce lifted himself off her, turned her over. Her hands and knees pressed into the narrow mattress.

Bruce took a moment to stretch, glanced back at Peter.

“My back’s starting to get tight,” Bruce said. “Do me a solid? Push my butt?”

April felt Bruce fumbling underneath her until his dick scraped into her. He grabbed her hips, a hard grip she was now familiar with, but she still winced.

Peter’s arms were getting tired. He was almost relieved when Bruce looked back at him, winked and came.

“Not fucking bad.” He held up a hand.

April realized what he wanted and high-fived him.

“You’re a lucky man, Wilson,” Bruce went on. “Having a cool-ass wife like April here.”

“And, look, this isn’t exactly the first time for me and April.”

Everything in Peter tightened.

Peter didn’t know what to say.

“And we want to keep doing this.”

“Not with you though.”

“But like I told April,” Bruce went on, “this is good. You need money, right? Well, I put in for your promotion after I talked with her. I mean, it won’t be this guy kind of money,” Bruce pointed at himself with his thumbs, “but it’s more. A little more.”

All this was expected – had been rehearsed – but tears still formed in April’s eyes.

“Great.” Peter slid off the bed, picked up the fishbowl.

Peter smashed the bowl down on Bruce’s head.

Peter brought it down again, over and over until the heavy bowl cracked and broke and Maze was hopping in a pool of Bruce’s blood.

April scooped up Maze in a cup and ran to their only bathroom. Peter watched Bruce’s foot until it stopped twitching.

April opened the closet, pulled out an axe and a roll of plastic bags.

She handed the axe to Peter. 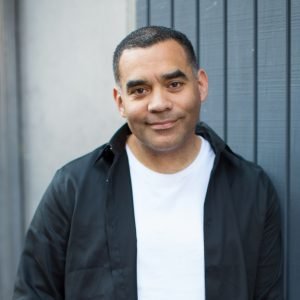