Cleaning Up Your Act

Pete Greensmith arrived in his beaten Toyota fifteen minutes late after stalling twice on the way over. He’d get a nineteen-eighty Mustang once the cash started rolling in. The best car, the only car. If God appeared on Earth with his long fucking beard, he’d choose a Mustang. A real hitman needed a reliable set of wheels. Dennis owed him, and he needed Pete.

He was getting out of the car when he spotted Mercer coming down the street. “Fuck!” he hissed. What was Mercer doing here? Pete’s head started pounding, which happened whenever he was stressed. It probably didn’t help that he smoked all that crystal an hour ago. No biggie – professionals handle shit. Time to start being one, headache or not, high or not. Mercer was his second hit, but Dennis still hadn’t paid him for his first. Whatever – that’s how Dennis rolled, and Pete would roll with it, because he did fuck up. He could still hear the phone conversation with Dennis last night:

“What the fuck did you do? You fricken bone head!” Dennis yelled into the phone.

“A pretty fuckin serious miscalculation. You shot him in front of a God damned McDonald’s!”

“You said that’s where he hung out.’

“Yeah, the same one a bunch of my clients hang out at.”

“You could’ve led him somewhere.”

“You tossed the piece, right?”

“Christ, you really are a fuckin idiot.”

“I was wearing a ski mask.”

“Then how come Mercer knew it was you?”

“He was over here getting high the other night and he told me. How did he recognize you?”

“I told you, you fuckin clown! He knows!”

“Can’t you front me something for the first one?” Thinking about the down payment he could make on the Mustang.

“Do this right first.”

“How much for this one?”

“This one’s to save your ass as well as mine, Cinderella. Tomorrow, my place, one o’clock. I’ll tell you what you gotta do.”

There were too many mistakes: too much drinking, the occasional bit of crystal. School wasn’t working out, and getting high was the answer. Fuck it. You made choices and you lived with them. Time to straighten shit out.

Mercer was headed up the porch. Could be a new plan – Mercer shows up first, they kill him in private, no mess. It made sense. Then there was always the possibility Pete could take care of Dennis, grab the cash and then go straight to the dealership. Play it by ear, he decided. He charged up the steps behind Mercer, gun at the ready.

The door opened just as Pete grabbed Mercer, shoving him into the apartment. Dennis pulled the door shut. Everything was covered in plastic. Pete had guessed right.

“What you wanna do?” Pete asked, gun in Mercer’s side. “Take him somewhere?”

“Here’s fine,” Dennis said, pulling his Glock, silencer attached, and in one fluid motion stepping up to Pete and putting a bullet in his head. Pete hit the floor with a slap, blood pooling out with the viscosity of spilled pancake batter, disbelief in his glassy eyes.

Mercer grabbed a towel to sop up the expanding puddle.

“No problem. You got a change of clothes?” Mercer asked, holding up his arms to display his blood-spattered shirt.

“Not necessary,” said Dennis, plugging three shots in his chest, dropping Mercer on the sofa like a fallen marionette. Dennis stared at the death tableau. Lesson learned: you want something done right, do it yourself. It was tough finding good help these days. 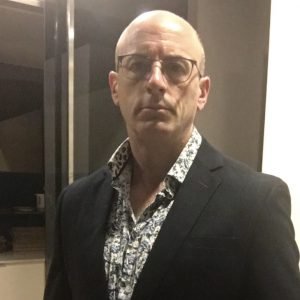 Tim Gerstmar has been teaching in Asia for fourteen years, living in South Korea, Thailand, China, and most currently in Kuala Lumpur, Malaysia. His crime novel The Gunfighters draws upon both his love of Bangkok and the dark and depraved. It is available in kindle format and soon in paperback on amazon. His short fiction has been published in The Flash Fiction Offensive, Punk Noir Magazine, and Dark Gothic Resurrected Magazine. You can find out more about Tim and his work on his website https://www.timgerstmar.com/