My eyes strained to adjust to sudden nightfall. The church’s cross stood sillhouetted against the last ditch rays of a gorgeous sunset; both of which I knew I didn’t deserve.

Why was I volunteering for a non-profit when I was broke, two steps from destitute? I had my reasons. It was my first teaching gig, facilitating a writing class for local Vets and Active Military to help heal the wounds of war. I’ve never served, but I had a hole blown in my spiritually bankrupt soul that I was pouring booze into all week. All it did was sink me deeper into my own trenches. Perhaps it wasn’t the most ethical choice to bee-line from Happy Hour to a church, where we were gonna have group exorcism with guys who had really seen Hell On Earth.

I walked in, clipping my shoulder on the door jamb. I was impressed they had all beat me there, their instilled military punctuality ahead of schedule. Until I looked at the clock on the wall and saw I was actually twenty minutes late.

I felt like a fraud, the way they all displayed their own heroic Hellscapes by regions on their Ballcaps of Honor – Korea, Vietnam, Afghanistan. Then the other Scorched Earth campaigns – Desert Storm, Operation Iraqi Freedom. I imagined the complexity of guts, glory and deception that these men represented. To be both hero and pawn for our country that couldn’t keep its tongue out of a beehive.

And who was I? Some spoiled brat that could have everything going for him if he hadn’t created a guilt-ridden Hell with his own two hands, that’s who. But I had found my people, at least for what I came for. If anyone would understand, it would be these compromised men.

I proposed we all dig deep, exhume every ghost that woke us up at night screaming.

“Hello, my name is Bradley Miller, and I’d like to start by saying ‘thank you’ for your service,” I said. I was met with a couple nods of acknowledgment while the others just stared a thousand miles past me.

“I’d like us to start with a prompt I’ve prepared. I’d like us to explore regret. What’s the darkest, most remorseful thing you’ve experienced that you’ve never gotten to dissect?”

Nearly everyone communicated reluctance, if not full denouncement of the exercise. I realized I had forgotten the most important part.

“And by the way, this is all confidential. Let us pledge that none of this will leave the room. You have my word.”

Mr. Vietnam was the shotcaller of this tight-knit group. He chided the others, reminding them that I was the one in charge, to do as I say. Show the kid some respect, he said.

Heads went down as pens scratched pads. I was an outsider, but grateful for this opportunity. Maybe this was all I needed to get a good night’s sleep.

It was gonna be fine. I was convinced whatever these guys were going to share – war crimes, hasty decisions that cost their buddy’s lives, maybe – all bound to be far worse than my one-time moral hiccup last week. Especially considering larger body counts these men have under their belts.

I was the first one finished. To give them the confidence to share, I went first.

I let it all out – what I did to the guy, where his body was now, what I did with the gun. What he did to cross me to justify the permanence of my knee-jerk vigilante justice.

But they went rogue on me.

While Mr. Afghanistan recalled the time he nearly blew his own brains out, I saw Mr. Vietnam with his back turned, talking on his cell, urgently relaying the address of the church.

I jumped out of my seat, lunging for his phone as he swung at me, connecting with my nose.

Maybe it was Mr. Desert Storm that whacked me with his cane while I held my nose to stop bleeding, but the flashing lights made a blurring strobe before everything went black. 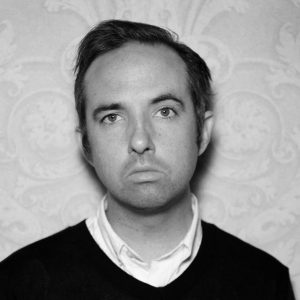 Author Gabriel Hart lives in Morongo Valley in California’s High Desert. His debut twin novel of surrealist noir Virgins In Reverse / The Intrusion (Traveling Shoes Press) was released in 2019, with foreword by avant-rockabilly provocateur Tav Falco. His upcoming desert speculative fiction novel Lies of Heaven will be published by Space Cowboy Books in 2020. His short-fiction and poetry have recently been published in by Black Hare Press and Things In The Well (Australia), Cholla Needles, the Howl 2018 and 2019 Anthology, the Desert Writers Guild Anthology, and Luna Arcana. Hart is a regular contributor to Space Cowboy’s Simultaneous Times podcast, as well as for L.A. Record, a Los Angeles underground music publication.