Tali Saddon looked at her target through the scope. The man who had ten seconds to live was smiling. He was bald, over fifty, listening intently to his host, prepared to laugh when the punch line came.

Unprepared for the bullet that would slam into his skull in a matter of seconds.

Her finger tensed around the trigger as she waited for the final order from Control.

Technically, she wasn’t ‘in’ yet. She didn’t know if she even wanted to work for these people. She wasn’t sure who these people were. The group was called the University and she had never heard of them before.

But Ronen Tayeb, her mentor back in Tel Aviv, seemed to know all about them. “It will be good for you and good for Israel,” he had said that night over wine. “They’re good people whose interests often align with our own.”

“And if they don’t?” she remembered asking.

“Then you and I discuss it,” Tayeb had said. “Remember, there is only one way to say ‘yes’, but a thousand ways to say ‘no’. You will always be Mossad, but you will also be our eyes and ears within the organization. Afterward, it could mean a promotion for you somewhere down the line.”

Talk of her career always got her attention. “Section chief?”

Tayeb had shrugged. “Section chief, bureau chief, even higher. I was assigned to them for a decade and used it to my advantage. I can’t order you to join them, of course, but I strongly urge you to consider it.”

Which was why Tali found herself alone on a warm spring night on a rooftop in Madrid, waiting for the order to kill a stranger.

But had she ever known anything about all the people she had killed in her career? Had she known the reasons why they were to be killed? Sometimes, but often the assignment had come in the form of a secure e-mail. A face, a location and a time. The reason didn’t matter. It didn’t matter now.

The countdown in her head continued. Eight seconds.

She had been with the Mossad for ten years, immediately after her service in the Israeli Defense Force had come to an end. Most of her friends had gone home after their required service had ended. Tali stayed. Her mother had dreams of her daughter becoming a doctor or a lawyer the way her brothers had. Find a nice man and settle down to raise a family.

But medicine and the law had never appealed to her. The army did. The first time she held a rifle, she knew this would be her life.

She wasn’t on that rooftop because of Tayeb’s urging or for her career. She was there because she wanted this. The rifle at her shoulder was merely a tool. Piping and ammunition that were useless without the skill to use it. She had that skill. She had that desire.

She wasn’t a law clerk or a doctor. She was death.

She didn’t tense. She didn’t wait for the command. She was simply ready. She had always been ready.

She squeezed the trigger.

The fifty-caliber slug evaporated the man’s head on impact.

“Target is down,” she said into her throat mic. “Moving out.”

She broke down the rifle as she went, tucking its contents into the bag hanging under her shoulder.

The dead man’s people would hit the rooftop in minutes. They would be looking for a man, not a young woman. She would be long gone by then, anyway.

“Congratulations, Professor Saddon,” the voice said in her ear. “You’re now a Faculty Member of the University.”

She folded the stock of her rifle, tucked it in her bag and zipped it up as she went down the staircase.

She may have been in Madrid, but she was home. She was in the University.

She didn’t know what that meant, but she intended on finding out. 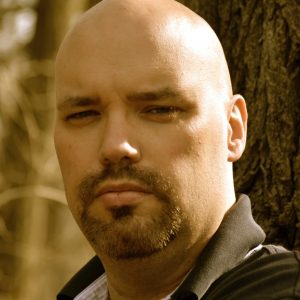 Terrence P. McCauley is an award-winning writer of crime fiction and thrillers. His the third novel in his University Series - A Conspiracy of Ravens - will be published by Polis Books in September 2017 and is available for pre-order now. The other novels in the series, Sympathy for the Devil and A Murder of Crows were also published by Polis Books. Terrence has also written two award-winning novels set in 1930 New York City – Prohibition and Slow Burn.
In  2016, Down and Out Books also published Terrence's World War I novella - The Devil Dogs of Belleau Woods. Proceeds from sales go directly to benefit the Semper Fi Fund. Terrence's short story 'EL CAMBALACHE' has been nominated for Best Short Story in the ITW's annual Thriller Awards. Terrence has had short stories featured in Thuglit, Spintetingler Magazine, Shotgun Honey, Big Pulp and other publications. He is a member of the New York City chapter of the Mystery Writers of America, the International Thriller Writers and the International Crime Writers Association. Terrence is an avid reader, a lover of classic movies and enjoys traveling. A proud native of The Bronx, NY, he is currently writing his next work of fiction.