My daughter squealed the words as I closed the storybook

I pulled four bundles from my sock drawer. Two grand. The take from the last round of cooks.

Three gates north and a right up an overgrown road to where my granddad had made moonshine. I always felt safer when I saw that JR’s shake-and-bake bottles were empty. He must’ve just gassed a batch.

“Untwist your tits. I’ve got three eight-balls of crystal and ten stepped-on grams.”

“I knew I could depend on you.”

“It’s the American way, Cuz. Now, if you want more product, I need to peel batteries, so you’d best be gettin’ on with gettin’ on.”

I pulled into the Dixie Café. When I finished my eggs, I stashed an eight-ball in the vinyl folder. The waitress brought back six fifty-dollar bills.

My next stop wasn’t a customer. The Allison Freeman – Attorney at Law sign was painted instead of carved, like she hadn’t intended to be around here this long.

“You should wear jeans more often,” I teased.

When she didn’t bust my balls, my radar pinged. “Ally, why’d you call?”

“As your lawyer, it’s my responsibility to inform you of everything I know, even if it’s an ancillary matter beyond the scope of current representation.”

I couldn’t decide if her stiff manner scared me or pissed me off.

“You’re awfully formal for someone who used to fuck my brother on the basement couch.”

She gave me a half-smile. “Sorry. Bad habit when there’s something I don’t want to say.”

“You have a warrant out of Shiner County.”

“A warrant? What the ever-living fuck for?”

Her words were clipped. “Did you used to go to Drillers?”

“We all did before the plant closed.”

“Were you ever intimate with a waitress named Amy?”

I combed my memory. Blonde. Black roots. I remembered the hair because I saw the top of her head more than once.

“She’s hanging the kid on you.”

“There’s no fucking way. Can’t I explain it to the judge?”

When she didn’t answer, I knew there was more. There’s always more.

“You’ve already been named the father. Unless you pay the full freight, I won’t be able to stop the warrant.”

She poured some whiskey. I savored the mellow burn.

Her voice was gentle. For a second, I was that kid with a crush on my brother’s cheerleader girlfriend.

“Child support court is only once a month. If they pick you up, you’re SOL.

I grabbed the bottle and poured a lot more than a shot.

“Fuck me to tears. Anything I can do?”

“Stay down here. Don’t give them any excuses. I’m going to need money to work with.”

I had to pay for pseudo, and I’d promised my mom money for Sissy. But there wasn’t shit I could do from jail. I gave her the cash bundles. “That’s what I’ve got right now unless you want to take it out in trade. I’m cuter than my brother.”

I ducked the thrown pen with a laugh. Shared history is the one good thing about a small town.

Route 17 North is smooth. Ally doesn’t understand. I owed those eights to a frat house douchebag. Business was business.

I chewed on it in my head. Ally would deal. She always did. They wouldn’t arrest me for this bullshit. It was about money. As long as JR didn’t blow himself up, I could get money.

The SUV with the Buckstop bumper had a fold-down spotlight by the driver’s mirror and a Smokey hat on the dashboard.

I had sale weight and a sawed-off under my seat. Coupled with the felony in my jacket, that was ten years.

All because of a fucking bogus child support warrant.

I hit the gas just as they hit the lights. Because I’m the fucking gingerbread man. 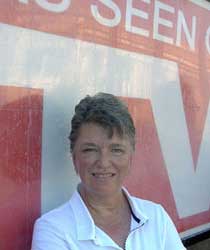 Terri Lynn Coop is a recovering lawyer and unrepentant geek. She's been known to blog and podcast. Check her out at www.terrilynncoop.com