Caputto was being a total dick when he gave me this car.

I guess he knows about me and Consuela. This is how he’d handle it, giving me this POS Toyota Tercel instead of facing me like a man. I waited the appropriate amount of time. Hell, they broke up last year. I haven’t rubbed it in his face even once that I’m having sleepover tickle-fights with his ex.

Fuck Caputto and fuck this roller skate of a car.

I didn’t get in the damn thing, I had to put it on.

I’m crammed in here with what’s left of Jimmy Legbone’s crew. Lemme tell you, these boys never missed a meal, all pasta and garlic bread and sugary-syrupy table wine. The back seat is jammed door to door with two mooks the size of polar bears. I folded them as much as I could but the one behind me has his knee jammed into my spine through the shitty bucket seat. Lil’ Sean, who’s name is meant to be sarcasm, is in front passenger rubbing shoulders with me and slowly leaking the worst ass gas that ever curled a nose hair.

Like a dead rat shoved a rotten egg up its ass.

The trunk has all the parts of Tommy C and Tommy G that I could find.

I didn’t kill these assholes. I’m the cleaner. I show up to the job and get given a car good for a few hours before it’ll be reported stolen. I load up the bodies, wipe the site, then drop them off at Jim Bob’s Crematorium to get mixed in with a few regular customer’s ashes.

Point is, I don’t pick the car, Caputto does.

And he fucked me.

No room, no radio, no A/C, just a four-cylinder engine in a macaroni box. The headlights are butter yellow and barely reach three feet from the fender. This much meat and the damn thing’s riding an inch off the road. I’ve got it ramped up to seventy and every crack in the fucking asphalt rattles my teeth.

Lil’ Sean cuts loose. I roll down the window.

Pussy ass Caputto, I’ll deal with him when I’m done with this fuckshit, and then I’ll treat Consuela extra special nice tonight. Maybe I’ll record her calling my name and send that shit to his phone.
What the fuck is this shit?

Light blasts through the back windshield, white and hot around the two bodies. There’s a deep roar of torque and horsepower that shakes the Tercel and a horn starts wailing. I slap the rearview mirror. A jacked pickup is on my ass.

It’s a two-lane road at midnight.

He flashes his brights again and hits that dumbass horn.

I’m supposed to be cool. Don’t draw attention to myself. Do the job.

First Caputto and now this guy?

I hang my arm out and flip him off.

The truck swings around into the empty oncoming lane. It roars up and I can see three guys in the cab.

Don’t do it, asshole.

The truck jerks toward me, cutting into my lane. I yank the wheel and the Tercel goes off the asphalt and into the grass as I stand on the brake. When the cheap-ass axle snaps I feel it under my foot. The compact car grinds to a stop on the side of the road.

The truck pulls off in front of me about twenty feet and backs up.

The doors open and out come three rednecks the size of the mooks in this car. They all have pitbull snarls and one is swinging a baseball bat.

I jerk the door open and pull myself out.

Before they can piss themselves I squeeze off three shots. This close, I don’t miss.

For one second it makes me feel better to plug these redneck assholes, make the world a better place.

But now I’m on the side of the road in a busted Tercel with eight bodies to move.

I wonder how that pickup drives. 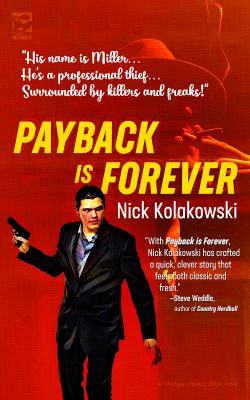