Henry looked around the room, considered his options, and jammed the hunting knife in Phantom’s throat.

“Holy shit!” The Smiler yelled, struggling to pull his .44 from the shoulder holster.

Pointless. Henry already had Phantom’s .9 mm and put one in Smiler’s left eye and one in Copperhead’s throat. One more went in Casper’s spine just above his ass, as he tried to flee the room.

Barracuda and Twist made it out though and Henry could hear their tennis shoes slapping the granite floor as they ran for the elevator. Henry took the stairs, two at a time. He didn’t pause on the second floor just kept going and was halfway down the hall on three when he heard the ding and the elevator started to open.

Half of Twist’s face splattered the back of the elevator and he flopped on his ass. Barracuda slammed himself against the wall and started punching the close doors button, but in his panic actually hit the open doors. Realizing his mistake, he stuck his nickel-plated revolver out the door, but Henry just shot his hand point blank, splitting it down to the wrist.

Barracuda had tears in his blood shot eyes as Henry got up close, pressing the .9 mm against his dick.

“Are you pleased with this outcome?”

“Let’s take a walk down the hall.”

Barracuda went first, his legs soft rubber, hugging his ruined hand against his belly, with blood steadily pouring onto the ground. The end of the hall seemed miles away. Henry was saying something, but it sounded like an echo at the bottom of a well. Barracuda had never felt so afraid in his life. He was a man who got by on the reputation of the harder men he ran with.

When they reached the door, Barracuda took a deep breath.

Barracuda reached out with bloody good hand and knocked gingerly. A hail of gunfire punched through the door and into Barracuda’s body. Henry held him up, using him as a shield.

When the barrage ended, Henry let his body fall to the side and with a smooth motion, kicked the door wide. Inside, Siren was reloading her AR-15, but the sight of Henry made her fumble and the clip slipped through her fingers, bounced off the edge of the desk, and came to rest between Henry’s feet.

Siren pressed herself against the bookshelf and shakily pointed to the bedroom to the left.

Henry walked sideways to the room and opened the door, keeping an eye on Siren, until he needed to check inside for anyone else. His niece was handcuffed to the bedpost; she looked drugged, but was alive.

“You know your brother came up short. You know the life.”

Siren tossed him the handcuff key from the desk. He caught it and quickly went inside and unlocked her wrist. She looked up with glassy eyes, relieved to see her uncle, but clearly broken inside.

Henry saw a shadow reflected in her eyes and spun around as Siren came in swinging a machete. She chopped into his left shoulder as he fired at her face, but the blow made him miss and he shot off her ear.

She stumbled back, yanking the machete out. He fired again and put a bullet through her cheek that blew out her eyeball and she crumpled to the ground. Henry tossed the gun and pulled his niece to her feet and took her down the stairs.

The morning sky was atomic purple and serene. He hugged her close as they reached his pick up truck.

“Grandpa’s waiting in Juarez, kid. We’re going to be fine.” 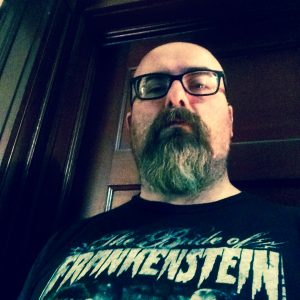 Tim Murr created the horror culture blog Stranger With Friction, is a featured contributor to Popshifter, and has appeared in ThugLit. He is the author of Motel On Fire, City Long Suffering, and Conspiracy Of Birds, among others. He was also the winner of the 2016 Art Inspires Story contest from Clive Barker and Fun Size Horror.