The car rolled to a stop just past the streetlight. Its driver had a white-knuckled grip on the steering wheel, his eyes wide with fear.

“Fuck.” He banged his forehead against the leather-covered wheel, hard enough to leave a bruise. His eyes drifted to the glove compartment.

He stayed like that until three taps to the window startled him. He rolled down the tinted window to see a tall man dressed in black, his hair pulled back out of his face. Rain ran down between his cold eyes.

Jenson fumbled with the door handle and tripped getting out, landing in a heap on the wet concrete. It smelled a little like gasoline. He scrambled to his feet and lowered his eyes before speaking.

“Thanks for coming, Laz. I know you don’t usually do this. Clean up isn’t really your thing. Not that you couldn’t! I just meant that you’re, uh, usually making the mess. That came out wrong. You don’t make messes, you — ”

“Shut up and show me,” Laz said, interrupting Jenson.

Jenson nodded and led him to the back of the car to show him the mess he made.

Upon lifting the trunk, Laz let out a low whistle.

“You really did a number on him, didn’t you?”

The body was shoved in the trunk, its limbs twisted at all angles. The face was bloody and swollen, so much that the face was unrecognizable. Next to it lay a dented bat and a pair of gloves.

“Did anyone see you?” he asked, putting them on

“Did anyone hear you?”

“Did you call anyone else?”

“J-just you and the boss,” Jenson said. “What are we gonna do? Oh, God, I didn’t mean to kill him. I just wanted to rough him up, but I just couldn’t stop.”

“Calm down, Jenson. Here, take this.” Laz handed him a lit cigarette. “We aren’t going to do anything. You are going to do exactly what I tell you and then this will never be mentioned again, like you said, you didn’t mean to. It was just a mistake, understand?” Laz’s bright eyes found Jenson’s in the dim light.

“What I want you to do is get in the car and drive to that abandoned bridge. You know the one I’m talking about?” Jenson nodded. “Good. You’re going to drive there and move the blockades out of the way. Move them, do not drive through them. Then you’re going to line up the car at the edge and get out.”

Laz slammed the trunk shut and walked to the front of the car, opening the driver door. He motioned for Jenson to get in before walking to the passenger side and continuing.

“Put a rock on the gas pedal and let it drive off and into the water. Then you put the barricade back and walk a few blocks before getting a cab and going home. Do you understand everything I just said?”

“Yeah, yeah, I got it all.” Jenson’s voice was shaky as he took a drag from the cigarette.

“Do you still have your gun?”

Jenson nodded and pulled it out for Laz to see. Laz took it from him and leaned against the frame of the open door.

“Repeat everything I just said,” he demanded.

“I drive to the abandoned bridge and move — ”

A single gunshot rang out, cutting Jenson short. Blood sprayed onto the driver’s window and dripped down.

Laz situated the gun into Jenson’s hand, whistling an upbeat tune. The cigarette still hung between Jenson’s lips until Laz shook his shoulder enough for it to drop.

Upon falling onto Jenson’s gasoline soaked clothes, a fire erupted.

Laz shut the car door and left it to burn. 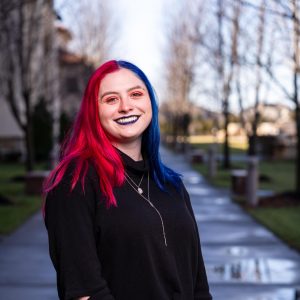 Katalina Bryant was born into the military and spent most of her youth in Europe, traveling everywhere she could. In her spare time, she enjoys reading and writing various stories. Her other work, "A Sunset of Blue Smoke," will soon be published in Literally Stories and "Satisfied" will be published in Scarlet Leaf Review. Follow her @KatalinaBryant on Twitter for more.