Excitement and anxiety feel almost identical to the body, so you might as well tell your brain it’s the former and just say, ‘bring it on.’

Nifty little observation, that. Insightful. It’s not mine, of course — I totally cribbed it from Emily, who’s a dab hand at the whole philosophy thing.

But even though it might not be my own original thought, that doesn’t mean I can’t make good use of it. I don’t get out that much so I’m excited about most things I come across, anyway.

So here we are, wherever here is. JoJo got us into this mess, as per usual, because she can’t resist mouthing off. And then when it all starts going south, where is she? Nowhere to be seen, also as per usual.

Emily said the ogre freaking out in the bedroom is JoJo’s boyfriend, in which case her taste has got even worse lately. You ask me I think he’s more likely her pimp, but I wouldn’t tell Em that. She’s a bit sheltered in that department. She loves her books and all that stuff, but she’s not so keen on the physical side.

I don’t know what JoJo said to piss him off this bad, although having had the treat of seeing him naked, I can probably guess. She’s insulted his manly pride, and someone’s got to pay for that.

Emily’s pretty good at talking our way out of tricky situations, but she doesn’t like it when things get hairy. So it’s down to me. I don’t have Em’s way with words, but I do have a knife, and a complete lack of anything resembling a conscience.

He’s a big bloke, JoJo’s boyfriend, but I have the element of surprise. He’s only ever met her, and won’t have a clue about the rest of us. Actually, I’m not even sure JoJo knows about the rest of us, but that’s a conversation for Emily to organize. My job’s right here, right now. It’s to get us out of here in one piece. Relatively speaking, of course.

I test the edge of the knife. Nice and sharp. Em’s trying to say something about consequences and all that shit, but I don’t care about anything like that. I’m just looking forward to a workout. 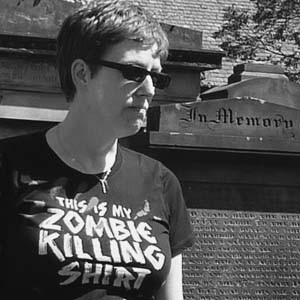 Michelle Ann King writes dark fiction  from her kitchen table in Essex, England. She has worked as a mortgage underwriter, supermarket cashier, makeup artist, tarot reader and insurance claims handler before having the good fortune to be able to write full-time. She loves Las Vegas, zombie films and good Scotch whisky.