When the left boot was almost full he dropped the suitcase in the dust and bent over, hands on his knees.

The sun was high in the sky, and the truck still four miles off, an oasis of shade, water, and ammunition. With any luck he had a half-mile lead, could limp his way through this last stretch in time. He coughed, bent down to take off his boot, and a bullet kicked up the dirt at his feet.

He jumped, then scrambled off the path up the hillside.

“I see you, Donald!” Boris shouted, and shot again.

Donald crouched behind a boulder, panting. He eased the revolver out of his holster to check it, again, but it was still empty.

“You dropped the suitcase, asshole!” Boris yelled. His voice came from across the trail, downhill. “Why don’t you go pick it up?”

Donald peeked around the side of the boulder, trying to catch a glimpse of Boris, but another shot rang out and he ducked back.

“You’re not shooting back!” Boris said. “All out of bullets, asshole?”

“Hear this noise?” yelled Boris. He rattled something. “It’s a cardboard box.”

The boulder was hot under his palms.

Donald knew what was in the box.

“It’s shells,” said Boris. “I’ve got more shells than I know what to do with.” He fired. “I wasn’t even aiming at you with that one,” he said. “I have so many of these I thought I’d just fire one up in the air. What the hell?” He fired again.

Think, Donald told himself. He’s got a rifle, fifty rounds at least, maybe a hundred. What do I have? An empty revolver. The shirt on my back.

“I’m in no hurry,” said Boris. “If you want to stay there for a while, maybe I can shoot us a rabbit and we can share it for supper.”

An empty revolver, the shirt on my back, and my hat and boots.

“Of course, if you want to throw your gun out,” said Boris, “maybe I’ll know it’s you coming out with your hands up.”

An empty revolver, the shirt on my back, my hat and my boots. My boots full of blood.

“Maybe I’ll know it’s you coming out,” said Boris, “and not a rabbit.”

My boots full of blood.

“If you wait, though, it might get dark,” said Boris.

Noiselessly, Donald eased off his boot and tipped it out. Blood pooled around the side of the boulder, trickling down the side of the hill. It smelled acidic and sour, like batteries and old milk.

He wrestled the boot back on, his sock squelching.

The blood trickled down the hillside, steadily, turning the dust dark.

“Did I get you, Donald? Are you hurt?” Boris’ voice cut through the quiet, closer now, and softer.

Donald wiped the sweat from his eyes, took off his boot.

“Are you dead, Donald?” Boris came around the boulder swiftly, but noisily. Donald whipped the boot at him, splashing his face with blood. Boris yelled and shot blindly, the bullet ricocheting off the boulder, and then Donald was at his throat, clawing and scratching.

When it was finished, Boris’ blood had joined his own and run all the way down to the suitcase. Donald stumbled down the hill, picked up the suitcase, wiped it off, and limped toward the truck. 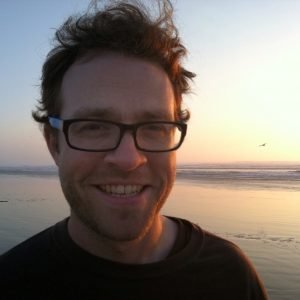 Drew Piston lives on Vashon Island with his girlfriend, Ellen. He spends his time writing, reading, coding, and playing music.