‹
›
-We should do something.
…
…
…
-Emerson?
-Like what?
-I don’t know.
….
…
-This is not our responsibility, Susan.
-Well, I think we should at least try.
-Listen, we’re pulling anchor on the afternoon tide. That’s, like, an hour from now. We can motor over then and see if he’s okay.
-Isn’t that just like you.
-Like me what?
-Pushing things off.
…
…
-You’re crazy.
-He’s really pink, Emerson.
-What do you want me to do, huh? You want me to take our dinghy and putter on over there? Intrude on someone else’s privacy? It’s the Caribbean. So the guy fell asleep and gets a wicked sunburn. Jesus, it’s not like the first time that’s ever happened.
-But it’s been almost three hours.
-He’s probably just drunk.
-In the middle of the day?
-There are these things called time zones. German time. English time. He could be Russian. Vacationing sailors down here, it’s rum-thirty and happy hour around the clock for Christ’s sake. He could be operating on a whole different time zone is what I’m saying.
-You think he’s European?
-Well, c’mon. Look at him. Guy is, like, wearing a man-kini. Anyway, are you going to join me for a dip?
-Maybe later.
-Suit yourself.
-It’s almost a quarter after one. I’m telling you, something’s not right over there on that boat.
-Susan….
-I mean, does that actually look comfortable to you? The way he’s splayed out on the bow with his legs like that? Maybe he had a heart attack.
-You’re insane. I’m going for a swim.
-Or a stroke.
…
-My father had a stroke all alone like that.
…
-One minute he was pruning the boxwoods, the next he was unconscious and drooling beneath the birdfeeder. My mother didn’t find him for hours.
-Here.
-What’s this?
-It’s an air horn, honey.
-An air horn?
-Yeah. You just press the button there and give it three blasts. If that doesn’t rouse him, I don’t know what will. But do me a favor and wait until I’m underwater when you cut loose with that thing.
*
-So, what happened? Hey, you okay, Susan? What’s wrong?
-Get back on the boat.
-Why? What’s going on?
-Can you please just get back on the boat?
-Did he wake up when you blew the horn?
-Can you please, please, please just get back on the boat?
-Hold your horses.
…
…
…
…
-Emerson, there are two other men.
-Wait…who? What men? Hand me that towel, would you?
-Over there. On man-kini’s sailboat.
-Where? I don’t see anybody.
-They saw me.
…
-I hit the horn like you told me to do, and they came up from below. The man on the bow didn’t move an inch. I waved, and the two looked at me but they didn’t wave back. They went below again. They were black.
-Black?
-Native.
…
-They didn’t wave back at me. Last night when we anchored in this cove there was just that man and a chubby woman and now there are two more men on that sailboat.
…
-What if something happened to her? She could be dead. Tied up below. They could be—
-Where are my binoculars?
-Shouldn’t we start the engine and just get out of here?
-It’ll be better if you took a breath and calmed down. This could just be a misunderstanding.
-Or they could be pirates.
-Right. Pirates. Sure. Or they could be visitors. Or friends. Or mechanics fixing a fuel line kink. Do me a favor and go below. The binoculars are in the navigation table on the starboar—the right side. Hand them up to me. Maybe I can see what’s what.
-They they are! Oh my God! Look!
-Holy fu—
-They’re rolling him into the water.
-Susan, get the anchor line. Do it. Go!
-What about the tide?
-You want to wait? We draw six feet. Get the goddamn anchor line. We’ll shoot the channel.
-Shouldn’t we call it in?
-This is the Dominican Republic. You suddenly speak French?
-Oh God…one of them is getting into their dinghy at the stern with a machete.
-Shit, shit, shit, shit sh—
~FIN~
"Blue Water Black" © 2013 Kieran Shea 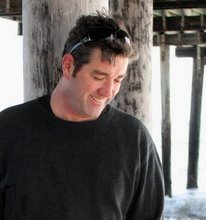 Kieran Shea lives outside Annapolis, MD. He believes everyone is guilty of something. He is the author of Koko Takes a Holiday from Titan Books. Available everywhere June 10, 2014.