So much blood!   On his gloves, on his jacket… on the knife lying beside him.   He scrubbed at the stains on his clothes with handfuls of snow.   His efforts seemed to make little difference but perhaps it was a trick of the twilight.   The image of her slumped against the counter flashed through his mind.   It made him retch.

But he had to get a grip and get moving.   It had started to snow again, which would make his trail harder to find.   The knife tied him to the scene but could be essential for a night spent in the open.   He cleaned it as well as he could and slipped it into its sheath.   Then he shouldered his pack and set out from the trees where he had been sheltering.   Time to head for the town on the other side of the hill.

The job had started just like any other.   He was sent a name, a description and a location.   He’d never needed anything more.

His target had a past – God, who didn’t? – and it was about to catch up with her.   She had eluded the boss for five years but no-one escaped forever.   They had traced her at last to a road-side shop-cum-post-office in the depths of the Welsh hills.   Then he had been dispatched to, well, dispatch her.

He had decided hiking would provide the right cover, given the area.   Nice big backpack to hide the gun; wooly hat and bulky jacket to disguise himself.   He even had a pop-up tent and a 500gsm sleeping bag, in case he needed to sleep out of doors.

The night before had been spent in a village B&B, though.   It was a small risk that had allowed him to gather information about the local area.   When he left, he set off in the opposite direction to the shop.   He doubled back through the fields once he was out of sight of the village.

He knew her as soon as he entered the shop.   No need to check the photograph he had carried in his pocket for so long; his only link to the mother he had never known.   She was older but the shape of her eyes, the curve of her jaw – they were the same.   The gun slipped from his fingers, the clatter making her look up.

“Can I…?” she began, then stopped when she saw what was lying on the floor.

“Ma?” he cried.   In an instant, he replaced his reason for being there with a new purpose.   He wouldn’t, couldn’t kill her!   He would help her, take her away!   Blood was thicker than water, after all.

“I haven’t got no kids,” she said, a confused frown on her face.   She was cool, he gave her that.   But she was lying – why was she lying?   He crossed the floor in a moment, the knife somehow in his hand, the blade pressed against her throat.

“You’re no son of mine,” she sneered and spat in his face.

He blanked out for a few moments and when his vision cleared she was dead, a dozen wounds in her chest and stomach.   There was blood everywhere.   He hadn’t shot her but the job was done.   The boss would care about loose ends though and he picked up the gun as he fled.

He replayed the image of her face, comparing it with his memory of the photograph.  He had been so sure she was his mother when he first saw her.   Now he realised that it didn’t matter.   She was a stranger either way.

Time to get himself home, collect his wages and focus on the next job. 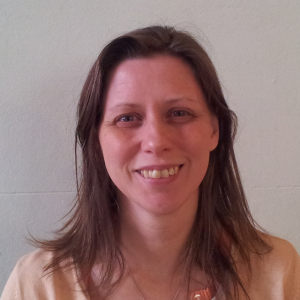 Rose Green is a creative writer who lives in Liverpool, UK.

She is married with two grown up children, a grandson and a mad female cat called Boris.   Don’t ask.

Rose has written fanfiction since 2001, has participated in Nanowrimo eight times and has also published a story with Shotgun Honey.   She is now looking to work as a freelance writer.