Blinded by the Light

Amateur blogger Katherine Reed hit the publish button on her latest post: Helicopter Parenting, in which she espoused the technique as the key to victory. She anticipated the usual accolades from followers and felt proud as a single mom.

On to the next task—laundry.

In her daughter’s room, she noticed Charlie’s laptop was still on.

Charlie was petite, blue-eyed, and blonde–pure pedophile bait. That they’d discussed the subject to death and Charlie’d still put herself online, infuriated Katherine. She needed to nip this in the bud. Katherine investigated the profile page like a detective, solving a crime. Charlie’s friends list was brief—just 6 people.

She heard her daughter’s protests in her head, Mom…you’re invading my privacy!

Incensed, Katherine jerked a chair out and sat. “Well, you just lost your computer privileges, missy.” She clicked on the site’s icon and a Gravatar grid of characters popped up. Katherine squinted at the universal graphic images of friends she recognized from other sites–Lindsay the cat, Debra the princess, Sam the rabid looking squirrel, and Alexa the peace sign.

The last two were new. A giraffe named Natalie and skeleton with a top hat and bow tie named Steven, it’s toothy grin mocking her. She hadn’t the first fucking clue who they were.

A ping suddenly erupted from the laptop and Katherine jumped.

She clicked open the conversation bubble.

It was from the skeleton, Steven.

She stared at it. Why was he contacting Charlie now? She was in school. Was it like Facebook, where you could see if someone was on and Steven thought Charlie was there?

Why wasn’t he in school?

The screen beckoned. The Internet Gods were begging her to bust this dick head.

She searched the chat history. Engagement started only last month with normal teenage yammering about a lot of nothing. Natalie introduced Charlie to Steven and the conversation dwindled to two. Katherine froze when they compared ages.

Steven was 17. Charlie only 14. He in high school, she junior high.

Katherine ignored it, reviewing more history, most just crap—music, games, food, school. Nothing about parents. Was she relieved or troubled?

She kept reading. The more she read, the madder she got.

She saw the instant the tone of Steven’s messages changed. Her daughter drawn in with his cheap ass compliments—a fly lured into a web with honey.

“You come near my daughter and I’m going to hunt you down and cut off your balls, little man,” Katherine whispered.

you don’t have a knife big enough, bitch!

The words sank in and Charlie’s disobedience became the least of her worries.

It was a direct response to her words. But how?

Goosebumps tiptoed on her skin. Holy fuck, he’d heard her!

The microphone was on and he’d heard her. His behavior jeopardized his friendship with Charlie. So why this stunt?

What if this wasn’t Steven?

Someone older? An online stalker?

She took a deep breath and typed a response.

Don’t you think you’re a little old for my daughter?

Aren’t you too old for puppies?

Katherine’s blood ran cold. Her gaze shot to the built in camera at the top of the screen. He could see her. Her pajamas were covered in romping dachshunds. She pulled the neckline of the top together in a fist.

How long had he been watching her?

Did he watch Charlie? In her bedroom!

She reigned in her fury. A calculating smile split her face as she looked into the camera. “It doesn’t matter what you think or who you are. You’re never going to see Charlie again. Ever.”

The pause seemed impossibly long. It was over. He was gone.

No Katherine, you’re never going to see her again

Helpless, Katherine watched in horror as the entire site melted off the screen and disappeared.

Downstairs, her computer announced the first comment on her successful parenting blog. 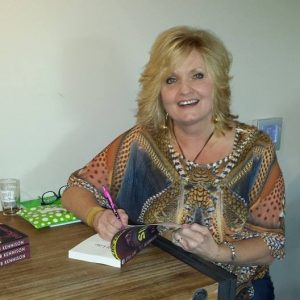 With voices running around in her head, and a knack for making stuff up, DB Kennison did the most reasonable thing she could—she began to write books about serial killers. Fueled with beer, cheese, and the rare marshmallow binge, her style is an entertaining mix of genres that keep readers guessing. A Colorado native, she now resides among the rolling hills and limestone bluffs of Wisconsin with her husband, and two spoiled dachshunds, which vie for position as daily muse. DB is hard at work on the third novel in the Randi Lassiter trilogy and the first book in a new thriller series.