Their only hope was that Father Derosiers was a creature of habit. Every Friday at 12:25 p.m. sharp, his 1984 Cadillac Fleetwood Brougham rounded the blind curve in Kavanaugh Street on his way downtown to what he called his deputy’s luncheon: deputy mayor, deputy police chief, deputy school superintendent and him, the auxiliary bishop of the diocese of St. Germaine.

The devil was in the details: She had to position herself just so in the driveway, three-quarters of the way down where she could see the street through a gap in the hedge and so would know he was about to make the turn. She’d counted the time it took vehicles to take the curve in the road, calculated the seconds she’d have, trying to factor in the speed at which she’d seen the priest drive. “God waits for no man!” she’d heard him say when a parishioner had joked about his reputation for exceeding the speed limit. She hoped his recklessness would ensure their success.

It was her cousin Danny who had warned her about him. “Fuckin’ creep,” Danny had muttered when Father D, as he told the kids to call him, passed their family’s pew in the Ash Wednesday procession. Later, when Danny heard that her eight-year-old brother Bobby was to begin private singing lessons with Father D in preparation for the cathedral choir audition, Danny had sworn a blue streak. “Cath, you can’t let Bobby take those lessons,” he told her.

At first he wouldn’t say why. Then, when he did tell her, she wasn’t sure she believed him. A priest wouldn’t do that, would he? Danny’s mother sure didn’t think so: when Danny had told her what had happened, she’d slapped his face and called him a liar. If Aunt Sally didn’t believe her own son, why should Cathy?

But she did. Danny’s clenched fists, his reluctant sharing of the barest details, the tears that rolled silently down his flushed cheeks, all convinced her of the truth of what he’d shared. He wouldn’t repeat it to her mother, though, and she couldn’t really blame him. In her experience, adults believed what other adults told them to believe, not what kids said. Her mom would believe Aunt Sally, not Danny. After all, saying something like that about a priest? You might as well have said the Pope himself had slid his hand down your pants.

Knowing what she knew, though, she couldn’t risk it happening to Bobby. But how could a 13-year-old girl and her 11-year-old cousin stop it?

Then, sitting on the porch one evening as brakes squealed on the street beyond the hedge, her mother had said it: “Someone’s going to get killed coming around that corner.”

Maybe, God willing, someone would.

And so, here she was, watching for the Cadillac to appear in the gap in the cedars, ready to count the seconds, hoping her timing would work.

Then, there it was: a flash of silver through the greenery. She gave the doll’s stroller a hard shove, propelling it down the few feet of paved driveway, over the sidewalk and into the street. She heard the screech of brakes, caught a glimpse of the priest’s panicked face as the car swerved hard and slammed into the five-foot cement base of the statue of St. Germaine in the parkette across the street. Just beyond, she saw Danny dart from where he’d crouched near Mrs. Grant’s garage. He scooped up the stroller and tossed it into the Grants’ backyard, as they’d planned, where it would go unnoticed among the tangled toys of the Grant brood. Then he disappeared into the fenceless backyards beyond.

Her gaze shifted back to the monument and the car jammed hard against its base. The car horn blared. There was no movement inside it, just a crumpled shape pushed up against the steering wheel.

“Mom, mom!” she shouted as she turned and ran up onto the porch, yanking hard on the metal screen door. “Call the police! There’s been an accident.”

Smoke and steam rose from the hood of Father D’s ruined vehicle. Bobby would be safe now. They all would. 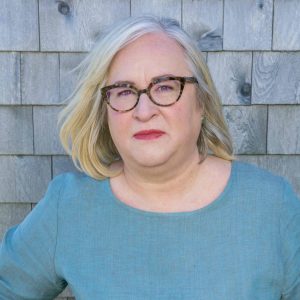 Kim Pittaway is a journalist and editor based in Halifax, Nova Scotia, Canada, where she is the executive director of the MFA in Creative Nonfiction program at the University of King's College. "Blind Curve" is her first piece of published fiction.