Before I started, Jerome told me he just wanted to live through it, which didn’t seem like much of a goal until I stuck the needle in his eye. Maybe the problem was my hand was shaking, or maybe I stuck the needle too deep, but once the steel tip went into his eyeball, Jerome’s new goal was to die as fast as he could. Or at least that’s what he told me when he stopped screaming.

I yanked out the needle as soon as the screaming started, and I waited to see if a guard would come, but no guard came. The cells around us were quiet. Then Jerome told me how much it hurt, as if I hadn’t guessed, and I thought for sure we were done.

But then he asked me how it looked.

Jerome has black eyes, and the idea was to make his eyeballs black too. I looked at his eye where the needle had gone in. There was a speck of black, and around the speck his eyeball looked bloodshot. That was all.

I said, Didn’t much ink get in before I pulled it out.

Jerome said, I didn’t tell you to pull it out.

Which was to say, I was to keep on going, which I didn’t want to do.

I asked him, You sure?

I’m sure, he said. I know what it feels like now.

So I did it again. When you stick a needle into a man’s eye, he ought to scream, but now Jerome was lying there and he wasn’t even twitching. Even so, it was mighty unpleasant work staring at the needle in his eye and working the ink.

Every time I stuck his eyeball, I expected it to pop and run like an egg yolk. After a dozen sticks, his left eye was solid black, and the whole time he never made a sound. But even with him acting like he didn’t feel any pain, one eye was all I could take.

I’m stopping, I told him. You might wake up tomorrow blind in that eye. Let’s see how it goes.

He didn’t sound mad, and he didn’t sound like he was threatening me, but I knew I’d better do it. He said it like he knew that from here on out, pretty much everybody was going to do everything he said. So I did it.

After I finished, he went to bed without saying anything. I did too. The next morning, before the guards came around banging bars, I asked him how he was doing.

I can see just fine, he said.

We were still in our bunks, him above me.

I said, Once you get out, what happens first time they’re looking for you? How hard’s it gonna be to find the guy with the black eyes?

He jumped down from his bunk.

Look into my eyes, he said.

I looked where his eyes had been, but there was nothing there now, just two black holes. I felt like I was looking into empty eyesockets, but I could feel them looking back. If I hadn’t been locked in a cage, I would have run. I had to keep telling myself, it’s Jerome, it’s Jerome, it ain’t nothing but Jerome.

I said, I feel like hell is looking at me.

That’s right, he said. Hell is looking at you. And once you’ve seen hell, who you gonna tell about it? You want hell to know you’re the one turned him in?

No, I said. When I looked at those black eyes, he wasn’t Jerome anymore. I didn’t know what he was, this thing I was locked up with.

I was still on my bunk. I turned away from him, curled up tight, and stared at the white wall. 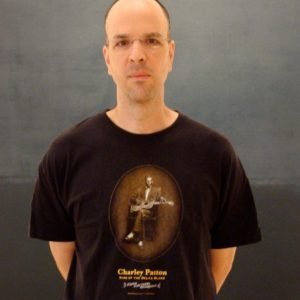