A shout awakened Moira, deep inside the cave where she slept. Blinking open her sleep-crusted eyes, she made out a dim light reflecting around the corner.

She’d stumbled upon the cave a year earlier, blitzed out of her mind in the woods behind the railroad tracks, just sensate enough to know she’d collapsed somewhere out of the midnight rain. She’d awakened hours later and lain all day in the dark, anticipating the inevitable rebirth of her humiliating urge to reawaken and drag her off on the daily hunt. But by nightfall, the need still hadn’t returned—somehow the millions of tons of rock and dirt over this dark hole in the ground had smothered her cravings.

She’d moved in the next day, crawling to drag a sleeping bag and a broken pallet far into the tunnel. Once or twice a week—wearing ear muffs to block her siren’s cry—she snuck out for supplies. For a year the cave had saved her, but watching the light steadily growing around the corner, she feared her respite was over.

“Far enough nothing drags him out,” said another.

Moira slithered out of her sleeping bag without moving the zipper. They were just beyond the last turn in the tunnel. Someone moaned.

Moira perched immobile while the voices and light receded. Eventually, the only sound was the raspy breathing of Jim, the man left behind. She was reaching for her flashlight when he spoke:

She heard the sloshing sound of liquid and the man gulping as only liquor is drunk. She shoved her fist into her mouth and bit down hard, shrieking inside her head, “No, no, no!”

There was silence. Then he answered, “Who’s that?”

“Is that booze all gone?”

“But I tell you what—you get me out of here and I’ll buy you as much as you can drink! Beer, wine, whiskey—scotch if you want it! Gallons! Just save me, Okay?”

Moira gasped and slapped her palms against the walls of the suddenly spinning tunnel to steady herself. Then she oozed onto the floor and curled up with her head between her knees.

“Nooooooooooooooo!!!!!” Moira roared with the murderous fury of a saber-tooth cat realizing its leap onto a dying mammoth has trapped it in the tar pits. She arched her back and thrashed wildly, screaming in desperation to heave herself out of the smothering mire:

“Do what?! Help me!” Jim pleaded, fearing hope was about to play him its final trick.

Moira’s convulsions had flipped her around, heading her into the cave. She pushed her toes against the ground and wriggled forward through the low corridor. Ignoring the pain as the rocky floor scraped her elbows and knees, she scrambled past her camp and through a virgin gap in the rock so narrow it bloodied her ears to push her head through. She exhaled to shrink her chest and squeeze her body through, dragging herself deeper into the twisting black maze until she no longer heard the voice calling out its lies behind her. She didn’t care she’d left her water and food, even dropped her flashlight in escaping the monster that had followed her into the earth. She would burrow beyond its reach and die free.

~FIN~
"Between the Rocks and the Hard Stuff" © 2014 Zakariah Johnson 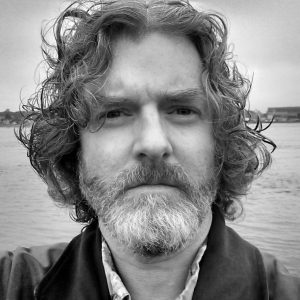 Zakariah Johnson has been a mink rancher, commercial fisherman, and repeated target of hungry polar bears. His short fiction appears in Shotgun Honey, Sherlock Holmes Mystery Magazine, Yellow Mama, and other fine outlets. Zakariah hails from NH where it juts up like New England's defiant middle finger, and has recently finished his novel "The Cutting Game," a knife-laden kidnapping tale set in the White Mountains.