She left me on a Tuesday. I stopped taking my pills the next Friday. By Sunday, I had decided to rob and steal until either a steady-armed cop or a jittery clerk had shot me dead. I started small, thinking small would be enough to get the job done. This is America. Every convenience store has a gun stashed behind the counter, right?

Apparently not, as the paunchy, middle-aged guy working the night shift at the first store reached not for a gun but for the floor as he begged me not to shoot him. I stuffed my unloaded pistol into my pants and fled with about eight hundred dollars. It was the same at the second store, and I even hit the third a little earlier – late evening as opposed to night – hoping that I’d double or triple my odds with some other customers present.

Nope. Two weeks past my lady dumping me, I’d hit five stores and the score was STOLEN CASH, seven thousand; LIFE-THREATENING INJURIES, zero.I needed to step up my game. I hit a bank. Not a big bank because I’d have to drive to the city for that and getting yourself killed shouldn’t be this much work. So I hit a small bank in town. I was in and out with thousands of dollars worth of teller cash in fifteen minutes. Like with the convenience store robberies, I wore a mask. I just wanted to die in a blaze of glory, not have my name and affairs spread across the evening news or have the cops busting down my door while I slept.

Four banks later and I was out of banks to hit within a reasonable driving distance. I spent one evening staring at a pile of cash eighty-thousand-dollars deep and wondering if I should just throw myself off a bridge. But nah … that’snot how Butch and Sundance would have done it. (Well, they did jump off that cliff, but, well, you know what I mean …) Anyway, it seemed like a waste if I didn’t get the thrill to go along with it.

Within the next week, I held up two jewelry stores, a pawnshop and, just for the hell of it, a car wash. The worst I faced was an angry pawnbroker too chicken-shit to throw anything more than an angry look at me.  At this point it seemed silly not to just walk up to a cop with my unloaded gun and point it at him until I was dead. But there was no sport in that, causing it to nag at my brain when I considered it.Like jumping off the bridge, it was just too easy. Nope, just had to find the right place to rob. It had to be out there somewhere.

Two months after she left me, I sat in my hotel room with roughly two-hundred-thousand dollars piled up on the bed. Still wasn’t taking my pills and, bizarrely, didn’t feel like I even needed them anymore. When my cell rang and it was her begging to take me back, saying she made a big mistake and couldn’t live without me, there wasn’t much I could do but laugh. I told her I’d think about it and call her back the next day, but two hours later the cops kicked in my hotel door. They had me on the ground and in cuffs before I could get to my gun and make things interesting. No idea how they found me. Maybe they tracked the car somehow, but I had just stolen it yesterday.

The jail cell they got me in sucks. I supposed I could hang myself with my bed sheet, but, again, there’s just no sport in that,you know? Maybe I’ll pick a fight with someone here during lunch. One of these guys must have a killer right hook in the literal sense. Then again, one of those stores should have had a damn gun behind the counter. 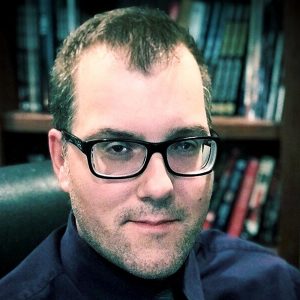 Robert Brian Taylor is a writer and journalist living in Pittsburgh, PA. Throughout his career, his work has appeared in an eclectic combination of newspapers, magazines, books and websites. He’s a lifelong cinephile and often writes and podcasts about film and TV at CultSpark.com. His short-film script, "Dig," was named an official selection of the Carnegie Screenwriters Script and Screen Festival in August 2017. You can find him online at rbtwrites.com and on Twitter @robertbtaylor.